Groups Fault Ui Chapter Of Asuu Over Comment On Unilorin 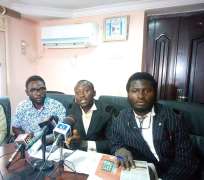 Some civil society groups have faulted the Academic Staff Union of University, (ASUU), University of Ibadan (UI) chapter over over certain remarks against the University of Ilorin as credited to the union.

Addressing a joint press conference in Osogbo, Osun state, the groups which include the Good Governance and Leadership Assessment Initiative (GGLAI), World Institute for Peace (WIP) and National Congress of Nigerian Students (NACONS) said the comment attributed to ASUU-UI against UNILORIN was unguided and irritating.

NACONS, Mr Yusuf Ariyo Musa and the South-West Coordinator of WIP, Abdulganiy Sahid Olaide Ezra said UNILORIN is a reputable institution and caution ASUU-UI to desist from making reckless statement on the institution.

In a press statement signed by the trio of Abdulfatah, Musa and Abdulganiy, the groups said it was imperative for them to speak on the matter given the reputation of UNILORIN which must be cherished and protected by well-meaning Nigerians.

According to the statement "The reputation of Unilorin compelled us to quickly react to what we considered as unwarranted, unguided and irritating remark of the Academic Staff Union of Universities, University of Ibadan Chapter.

"We use this medium to raise our voice antagonistically against the body that has done more harms to Nigeria education through it various notorious selfish demand from the Government and the rascal and reckless manner it has been adopting in pursuing its selfish goal always at the expense of the interest of Nigerian students and parents."

"It is sardonic and silence breaking when the "evil gang" called ASUU who will not behave like people with senses, who will not follow the rule of law in their action and reaction, who are nothing but deadly viruses that is positioned to endanger the future of this continent been bad example for the students will carelessly attack a university known for moral, and academic high standard, a source of coordinated, composed, disciplined, hardworking and brilliant labour force."

"A unique institution that has not welcomed the rascality of ASUU is UNILORIN, only that pains the gangsters ASUU. It is a joy of the parent and the NGOs specialized in promotion of education, good leadership and peace in Nigeria."

"If we consider ASUU as harmful to Nigeria project, we are convinced about this. A body that is unsympathetic about the leadership and economics reality of our country when they plot to get more from the country. And will not pursue their agenda of getting more from Nigeria except through strike action which has punctured the hope of Nigeria education."

"We cannot say less than to thank University of Ilorin for getting it self "immune" of saboteur that is best described as rascal virus in their institutions. We cannot but applaud its over decade old of academics activities without strike. Others public universities in Nigeria are urge to be wary of the rogue virus that it existing and germinating fast in their institution. "Kill it before it kills your goal!"

"We are not surprise that ASUU remark was of that kind, being a lawless body and expire militant organization that does not have law, do not respect law and cannot belief in the law enforcement agencies like EFCC, ICPC and CCB. Always act and write petitions selfishly and (or) witch-hunting institution with active rascal immunity. Only a rogue and uncivilized agency like ASUU will see substance in subjective, ego driven and witch-hunting petitions of the rascal virus".

"One would expect a civilized body to encourage its members when they feel they are unjustifiably treated by University of Ilorin to approach the court or explore dialogue instead in such a bear parlour remark that could only source from bunch of drunkards."

"He who the God wants to destroy first made mad: The recent statement from ASUU U.I. showed the level of the intelligence and education of those employed with task payers money for the training of today and tomorrow leaders otherwise known as students. One wonders while our society is drifting from good to evil everyday?"

"Just when ASUU attacked the personality of prof. Ishaq Oloyede through their frivolous petitions, the man showed his integrity colour as the incorruptible leader he is known for many years at University of Ilorin by remitting N5bn (Five billion naira) with an outstanding of N3bn (Three Billion Naira) making N8bn (Eight Billion Naira) through JAMB Treasury Single Account. The first remittance in the history of JAMB in her over four (4) decades existence."

The groups said it is unfortunate that ASUU-UI didn't realise the successes of the Professor Abdulganiy Ambali regime has recorded. "We called on those that are medical optical surgeon among them to rise up and help their comrades from going permanently blind. We also called on well meaning Nigerians, concerned peace lovers, human right activist.

"We send our warning to rebel leaders and their allies: Dr. Ayodeji Omole and Dr. Ade Adejumo to limit their destructive venom where they have influence to U.I where they are exhibiting their barbaric and egocentric attitude. Therefore, UNILORIN can best be described as anti-terrorist academic institution and a center of excellent and peace."