List of President Buhari's Massacres, Secret Burials From 2015-2017 As Reported 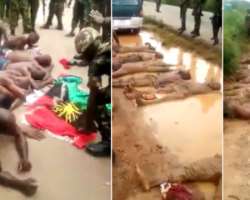 There is a growing list of state perpetrator massacres, with the victims either declared missing or discovered to have been secretly buried in mass graves in the two plus years of the administration of Nigeria's elected military dictator Muhammadu Buhari.

Below are some of them:
Description: Massacre and Secret Burial. Between December 12th and 14th of 2015, 1000 minority Shia Muslims were killed and buried secretly in the middle of the night by a joint action of Nigerian military, fanatic civilians and the Kaduna state government. The Nigerian government months later admitted to killing and secretly burying 347 citizens.

Number Massacred: 1000
Location: Zaria, Kaduna state.
Date: December 12th - 14th, 2015
Excerpt: "The Kaduna State Government on Monday announced that 347 persons were killed during the December 12 Shiite/Nigerian Army clash in Zaria... The burial of the victims was done in secret... Mr. Lawal, who led a six-man government witnesses before the panel, said 191 corpses were taken from the Nigerian Army Depot, Zaria, and were buried at Mando area of Kaduna. He said 156 corpses were also conveyed from the Ahmadu Bello University Teaching Hospital (ABUTH), Zaria, to the same Mando area. The official said the corpses were those of youth members of the Islam Movement (IMN) ...The state government said the corpses were committed into a single grave (mass burial) at the Mando area jointly supervised by the state government officials and about 40 men of the Nigerian Army, led by an officer in the rank of a Major."

Description: Massacre of One. Eighty-seven-year-old, Octogenarian, Alice Agbemrehwue Omadefe of Ovre-r'Eku, Ethiope East Local Government Area of Delta State went missing after soldiers recruited by Presco Plc and Newcross Petroleum Limited violently attacked over 500 protesting women. The protesters said that their oil wells and farm lands had been forcefully taken over by the two companies and the Edo State Government.

Number Massacred: 1
Location: Delta state.
Date: March 2016
Excerpt: "It was a pathetic sight as this reporter, who was monitoring the protest took to his heels alongside the protesters when soldiers chased the women most of whom are in their eighties into the adjoining bushes around the site, wiping them with tree stems while others kicked the women as they tried to run away from the scene. In the ensuing confusion, some of the protesting women sustained injuries and were rushed to the hospital while others fled into the bush. Among those who fled to the bush to escape the fury of the soldiers was Madam Alice Omadefe, whose whereabouts are now a source concern for her family and the community."

Description: Massacre and Secret Burial. From May 29th to June 3rd. Over 100 pro-Biafran protesters killed in coordinated massacre by Nigerian army and police. Many killed while sleeping in a school near St. Edmund Catholic Church Onitsha. Random killing of groups of civilians in Asaba and different parts of the South East.

Number Massacred: 100+
Location: Onitsha, Anambra state
Date: May 29th - June 3rd, 2016
Excerpt: "In Onitsha, dozens of trucks and vans filled with soldiers in combat gears raced down major roads and streets. Any gathering of three or more people was at risk of being fired upon... Three military trucks were used to cart away heaps of dead bodies... A security source, another SSS source and a military police source individually confirmed that a mass burial occurred in the afternoon of Wednesday, June 1 in a military cemetery, near Yahweh Church, inside the Onitsha Military Barracks."

Description: Large scale massacre of dozens of villagers by Nigerian Army in June of 2016

Date: June, 2016
Excerpt: "At one point, two men stepped from inside their homes. The soldiers shot both of them, witnesses said. Seven other men came out of their homes and were shot, too.

“We watched so many of them killed like that,” Mallam said. Then the soldiers turned their weapons on the crowd, gunning down 13 more men. The soldiers grabbed a canister of fuel, doused rags and set fire to all the grass huts before leaving."

Description: At least 26 unarmed civilians massacred during invasion of the house of Biafra secessionist leader Nnamdi Kanu after loyalists reportedly threw stones at a military convoy deployed to his street. Videos showed the house completely riddled with bullets and bodies sprawled around. Many of the victims' bodies were reportedly found where they died of bullet wounds in near by bushes. Nnamdi Kanu and his parents are still missing.

Number Massacred: 26+
Location: Umuahia, Abia state.
Date: September 14th, 2017
Excerpt: "THE Indigenous People of Biafra, IPOB, said Sunday night that five people were feared dead and about 30 others injured when gunmen suspected to be soldiers allegedly attacked the country home of the leader of the Indigenous People of Biafra, IPOB, Mazi Nnamdi Kanu.