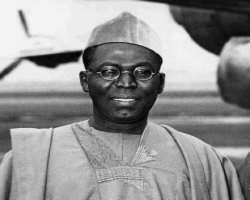 Revisionists are everywhere. For the most part they are attempting to rework history by allowing their prejudices, illiteracy, and preconceived notions to cloud their reasoning. These critics have become masters at injecting willful fallacies, calculated falsehood and historical nonsense into history; and in so doing, have began to cast aspersions on the memory of the great Obafemi Awolowo.

Chief Obafemi Awolowo was a political giant with an extraordinary mind and talent. He was graceful, charismatic and purposeful. Most of all he had vision, and was a nice and decent human being! Yes, Chief Awolowo had his shortcomings. He was not a saint. However, his failings and missteps were far fewer and less injurious than those of his contemporaries. Within the context of Nigerian, and indeed within African politics, Awolowo had no equal. None!

He towered above his contemporaries. Not only that -- all the leaders we've had since his exit from government and politics have been political dwarfs. One would be hard-pressed to name a political leader in Nigeria -- since the second-half of the twentieth century -- who did more for his people and for his country than Awolowo.

Awolowo was not a President. He was the Premier of the Western Region of Nigeria from October 1, 1959 until October 1, 1960. Nonetheless, his accomplishments dwarf the combined achievements of the last five heads of government Nigeria has had. And so from now until eternity his contribution to Nigeria's socioeconomic and political life will be remembered and appreciated by discerning minds. As a federal minister under General Yakubu Gowon, he saved Nigeria from self immolation.

From the time he began his political career until his passing to the heavens -- his two great public missions was to make Nigeria better than the way he met it; and also, to secure Nigeria's economic, social and political future for the next generation. But he was unable to achieve his presidential dream because he refused to compromise his principles; refused to betray his constituent and his conscience; and also refused to bow to the whims of the Colonialist. In addition, he refused to obey orders given by Dodan Barracks.

For these and other reasons, therefore, he was denied the ultimate political price: the Presidency of the Federal Republic of Nigeria. Because he was denied this political price, Nigeria has remained in the doldrums ever since. In Chief Awolowo, we lost the brightest star we've ever had and may have to wait another seventy-year for a man like him to take Nigeria to the Promised Land. Frankly, to say he was a statesman is an understatement. If he was an American or a European, the world would have placed him in the same league as Churchill, Roosevelt, Charles de Gaulle and many others.

We now have a budding school of shortsighted, narrow-minded, and mean-spirited critics who are into Awo-bashing: rewriting history, repeating age-old falsities, spreading lies and innuendoes and casting aspersions on the Great One.

Charles Caleb Colton it was who said that "In life, we shall find many men that are great, and some men that are good, but very few men that are both great and good." Chief Obafemi Awolowo was such a man. He was good. He was great. He was extraordinary in many ways. And so I remember him today as I have since his passing on May 9, 1987.

Chief Awolowo was born at the right time, and lived his life in the right country. But whether our country was right for him is another question. His impact on the lives of millions of Nigerians is immeasurable. He lived his life for the people. More than two decades after his untimely passing, he remains the yardstick by which greatness is still measured in the most populous and most important country in the Black world.

He was a truly great man. Because of his brilliance and strength of character, he was very much misunderstood and envied; and because most couldn't measure up to his expectation and greatness, they vilified him. If you were not alive when Awolowo lived, or if you were not fortunate to have met him, well, let me tell you this: He was graceful. He was charismatic. He was purposeful. Most of all he had a clear vision of what he wanted for Nigeria and for humanity. Above all else, he was a nice and decent human being! Oh AWOLOWO!!

Within the context of Nigerian, and indeed within African politics, Awolowo had no equal. He towered above his colleagues. To truly appreciate his greatness, all you need do is to take a look at the men and women who now dot, and have dotted our public estate and public space. Do so and you'd be hard-pressed to name a political leader in Nigeria, in the last 50 years, who did more for his people and for his country than Awolowo. In him we lost the brightest star we ever had and may have to wait another seventy years for a man like him

As I think of Awolowo, I wonder what would have become of our country. I think of how far we would have gone in terms of human and economic development. I think of all the possibilities and the dreams and aspirations we had as a nation. I miss him. I miss a good man, I miss a great man. I cannot now remember who it was who said, "Some people come into our lives and quickly go. Some people move our souls to dance. They awaken us to a new understanding with the passing whisper of their wisdom. Some people make the sky more beautiful to gaze upon. They stay in our lives for awhile." Awolowo was this and much more. He will remain in our lives for eternity.