Chelsea may lose place to Zappacosta in Chelsea match against Arsenal 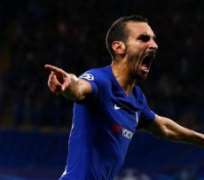 Chelsea take on Arsenal at Stamford Bridge this weekend after an emphatic victory in the Champions League in midweek, causing Antonio Conte one or two selection headaches.

The Blues strolled to a 6-0 win over Qarabag despite making a few changes to their starting XI, with Davide Zappacosta perhaps one of the most eye-catching players on show.

While the Italian wing-back was a somewhat low-key deadline day signing for Chelsea, he announced himself in some style on these shores with a wondergoal and an assist on the night to give Victor Moses reason to fear for his place.

That is just one of many decisions for Conte to mull over ahead of the weekend, and here's our take on how Chelsea should line up against Arsenal… Defence

The major question here is – will club captain Gary Cahill be reinstated for Chelsea, or will Conte stick with the in-form Antonio Rudiger in his back three?

Gary Cahill was made Chelsea captain this season (Picture: Getty)

The Germany international, a £34million summer purchase from Roma, has filled in well during Cahill's suspension since that opening day red card in the defeat to Burnley.

Still, one must assume Cahill remains first choice in Conte's mind, or it's incredibly unlikely he'd have made him the new captain to replace the departing John Terry this season.

One of Chelsea's most reliable performers and most experienced leaders on the pitch, Cahill seems likely to make his return in place of Rudiger after serving his three-game ban, but he'll have to be at his best if he is to see off the potential threat of Rudiger again. Midfield

Zappacosta vs Qarabag
84% pass accuracy
3 shots
2 crosses
3 blocks
1 goal
1 assist
Despite being such a key performer in Chelsea's title-winning side last season, it would be little surprise if Moses were to lose his place to the exciting Zappacosta this weekend, and perhaps for much of the rest of the season.

The 25-year-old looks a real talent and one who could do real damage to Arsenal with his pace, energy and quality going forward on that right-hand side.

Of course, Arsenal are an entirely different calibre of opposition, but Conte hinted he would continue with the Italian after being thoroughly impressed by his performance in midweek.

'I'm really pleased with his performance,' Conte said. 'Now we have to continue to play with him and the other players. He played a really good game. Now he has to continue to work to improve, but for sure, Davide knew very well my style and idea of football. For this reason I decided to start with him. He was prepared to play, and played very well.'

Could Victor Moses' place be under threat from Zappacosta? (Picture: Getty)

Moses, meanwhile, arguably had one of his worst games last season in the FA Cup final defeat against the Gunners, struggling to cope with the threat of Alexis Sanchez on his side, and getting himself foolishly sent off later in the game.

Elsewhere in midfield, there is a decision to be made on who to partner N'Golo Kante, with Tiemoue Bakayoko surely set to get the nod after his fine start in England and with Cesc Fabregas starting the game on Tuesday.

Attack
Finally, one more big question mark is over the selection of Eden Hazard, who is back from injury but seemingly not yet back in Conte's mind for a starting spot.

For one thing, the Blues boss needs not worry when both Pedro and Willian are in such superb form, with both shining again against Qarabag this week.

When asked if Hazard could return to the starting XI against Arsenal, Conte hinted he was still not ready, saying: 'It's too early to speak about this. We must have a bit of patience with him to give him the possibility to recover very well, to be totally fit. I think this is the right process for him. Don't forget in the team there are two players, Pedro and Willian, who are playing very well.'

Pedro and Willian's form means Conte is unlikely to miss Hazard too much (Picture: Getty)

The Belgian came off the bench against both Leicester and Qarabag, but failed to make a noticeable impact. Pedro, meanwhile, scored on Tuesday night, and Willian grabbed himself an assist.and the Man of the Match award.

Having been rested in midweek, Alvaro Morata is also surely set to return to the starting line up against Arsenal. Chelsea XI in full