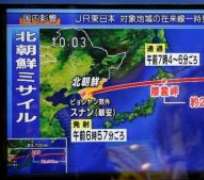 For the second time in a month, North Korea has launched a missile over Japanese airspace, U.S. Pacific Command confirmed Thursday evening.

The intermediate range ballistic missile originated from the Sunan, North Korea area and flew east over Japan before landing in the Pacific Ocean, according to a statement from Commander Dave Benham of USPACOM.

Benham added that NORAD and USPACOM determined that the missile posed no threat to North America or Guam, respectively.

Secretary of State Rex Tillerson said in a statement, “These continued provocations only deepen North Korea’s diplomatic and economic isolation … United Nations Security Council resolutions, including the most recent unanimous sanctions resolution, represent the floor, not the ceiling, of the actions we should take. We call on all nations to take new measures against the Kim regime.”

Japan’s public broadcasting network NHK earlier reported that the missile passed over Japanese airspace near Hokkaido, the same prefecture under which a KN-17 intermediate-range missile travelled on August 28, and ultimately landed in the Pacific Ocean.

NHK ran an urgent on-air alert warning the populations of 12 prefectures in the country’s north early Friday morning local time. The network reported that the launch seemed to have occurred at 6:57 a.m. in Japan and entered the country’s airspace seven minutes later.

NHK added that there was no attempt to shoot down the missile that exited Japan’s airspace after two minutes and landed in the ocean at 7:16 a.m.

Japan’s Chief Cabinet Secretary Yoshihide Suga said the missile was launched from the west coast of North Korea and traveled over Japanese airspace from 7:04 a.m. to 7:06 a.m., and landed about 2,000 km (1,243 mile) east of the Erimo peninsula. No falling object was found and no ships or airplanes were affected, he said.

In a release provided by the U.S. Department of Defense, the South Korean Joint Chiefs of Staff said that upon the missile’s launch, South Korea fired a missile of its own to the East Sea. They added that the South Korean military is maintaining full readiness and tracking North Korean movements.

The launch is the 14th missile test conducted by North Korea in 2017. On September 3, North Korea said it tested a hydrogen bomb, leading to sanctions being passed against the country by the United Nations Security Council on Tuesday.

The tweet below from NHK says that the missile passed over Japanese airspace.

Matthew Galat, an American living in Japan, posted a video to Facebook in which warning sirens are heard in the background.

This story is breaking. Please check back for updates.