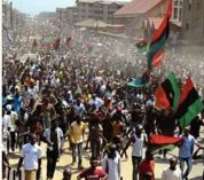 Abdulkadir Erkahraman who is a Turkish diplomat has reacted to the reports that the country home of Nnamdi Kanu, leader of the Indigenous People of Biafra (IPOB), was allegedly invaded by soldiers.

The controversial diplomat who was the first international emissary to visit Nnamdi Kanu in Nigeria in a post on his Facebook page on Sunday, September 10, said the Nigerian government is crossing the red line and wants to push Biafrans to arm struggle.

“They can’t stop Biafra Nation with this kind of dirty games.Time to be together Biafra Nation. The Nigerian government wants to PUSH Biafrans to arm struggle! “Right now states that operatives of the Nigeria Army under Operation Python Dance II have invaded the home of Mazi Nnamdi Kanu’s in Umuahia, Abia State.

“There is no doubt that the present deployment of troops to the South East is to haunt for my client and possibly eliminate him. Let the whole world know that if anything untoward happen to Leader of IPOB, that president Buhari and his Chief of Army Staff should be held responsible by the international Community.”

Earlier reports that soldiers allegedly from the Nigerian army reportedly laid a siege on the country home of the Indigenous People of Biafra (IPOB) leader Nnamdi Kanu in Umuahia. This allegation was contained in a statement issued by the Kanu’s lawyer.

According to Kanu’s lawyer, Ifeanyi Ejiofor, the military had on Sunday, September 10, shot sporadically into the air through which 3 people have been reported dead and over 20 injured.