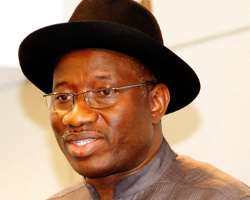 President Goodluck Jonathan
A whopping N54.6bn is contained in the 2010 budget as the amount to be spent on travels by officials of the Presidency, National Assembly, ministries, departments and agencies this year.

An analysis of the troubled budget shows that the House of Representatives has the highest allocation of N23.6bn. The amount covers both international and local travels of its 360 members.

It is followed by the MDAs, which have N23bn for travels. The Senate has a N5.7bn vote for its 109 senators, while the State House or Presidency has N2.3bn.

President Goodluck Jonathan signed the budget into law on April 22 amid reservations. It was discovered that it had grey areas that would make its implementation cumbersome.

The Executive had sent a budget of N4.079tn but the National Assembly approved N4.6trn, showing an increase of N528bn.

One of the budget's discrepancies came to light on the floor of the Senate two weeks ago when Senator Lee Maeba raised the alarm that N5.8bn was allocated to a fake body, the Maritime Safety and Security Agency.

But it has since been discovered that the actual allocation for the non-existent agency is N22.8bn.

This is contained on page 868 volume 11 of the 2010 budget, under the subhead, Presidential Implementation Committee on Maritime Safety and Security Agency.

Apparently, Maeba had relied on a letter from the Office of the National Security Adviser, which put the financial imperatives of establishing the outfit at N5.8bn.

A letter dated April 23, 2010 by the Presidential Committee on Maritime Safety and Security Agency and signed by Air Vice-Marshal, S.A Atawodi (retd.), was forwarded to the Senate and implored it to pass the bill because of the importance of the agency.

Among the MDAs, the Ministry of Foreign Affairs and foreign missions have the highest amount of N3.7bn allocated for travels; the Nigerian Army, 1.37bn; and the Police Formation and Command, N1.35bn.

While the Auditor-General's office has N337.6m, the Nigerian Air force, Ministry of Finance, and Office of the Accountant-General of the Federation have N338.9m, N367.8m, N398.7m budgeted for both local and foreign travels respectively.

It was learnt that the chairmen of the Senate and House of Representatives Committees on Appropriation met on May 21 with the Director-General (Budget Office), Dr. Bright Okogu, to study the grey areas likely to affect the budget implementation badly.

Travels by civil servants and public office holders have been abused yearly, a development that informed the setting up of a unified system called Electronic Travel Desk last December by the Head of Service, Mr. Steve Orasanye.

In his memo to ministers and heads of departments on the issue, he said the policy was based on 'the need to ensure the standardisation of cost, streamlining and coordination of staff travels.'

But the then Attorney-General and Minister of Justice, Mr. Micheal Aondoaaka (SAN), had opposed the establishment of the desk. He also exchanged combative memos with the HOS.

Also, Aondoakaa had, in January, requested for the release of N50m to enable a team to travel abroad to launder the country's image in the wake of Farouk Abdulmutallab's ill-fated attempt to bomb a US airline.

Aondoakaa claimed that his request was based on a presidential approval. The claim, which came at the height of anxiety over the health of the late President Umaru Yar'Adua stirred a controversy. As at the time, the President was critically ill at King Faisal hospital in Saudi Arabia, and no government official had access to him.

Consequently, his request was said to have divided the top officials of the Ministry of Finance as a former Minister of Finance, Dr. Mansur Muktar, allegedly approved the request, while the Minister of State for Finance, Mr. Remi Babalola, rejected it.

Okogu had confirmed that his office received such application from Aondoaaka, but he could not say whether it was approved. He said there were many requests of such nature which were not approved.

On whether the centralised travel unit would still function under Jonathan's presidency, the office of the Head of Service said it was awaiting a new directive on the issue.

A Deputy Director in the HOS office, Mr. Tope Ajakaiye, told one of our correspondents on Friday that, 'it was the old Federal Executive Council that deliberated on it.'

Ajakaiye, who is in charge of Press and Public Relations, added, ' I expect that if the government is still interested in it, the matter might be raised when the government settles down.'