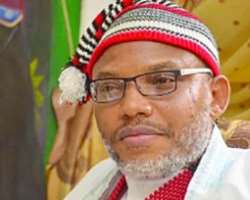 The move by the Federal Government to re-arrest Nnamdi Kanu, leader of the Indigenous Peoples of Biafra (IPOB) is, as expected, generating interesting conversations, grandstanding and competition for the moral high ground. The Federal government on Friday August 25 2017 asked the Federal High Court sitting in Abuja to revoke the bail granted Nnamdi Kanu on April 25, 2017 onthe ground that Nnamdi Kanu has flouted his bail conditions.The stringent bail conditions given by Justice Nyako includedthat the IPOB leader must not hold rallies, must not grant interviews, must not be in a crowd of more than ten people and must provide three sureties in the sum of N100 million each and that one of the sureties must be a“highly respected Jewish leader.”

Expectedly, the Igbo socio-cultural group, Ohaneze Ndigbo,condemned the move to re-arrest Kanu, calling it the height of hypocrisy and pointing out that the Arewa Youths that issued quit notice to the Igbos were allowed to go scot free despite Governor El Rufai’s vow that they would be arrested. The Northern Elders Council and the Northern Elders Forum through their respective chairman Alhaji Tanko Yakassi and Mr Paul Unongo took sides with the federal government. While Yakassi argued that every Nigerian must respect court orders irrespective of their ethnic affiliation, Unongo contended that “Kanu’s case was 100 per cent different from the ultimatum issued by the northern youths”. Unongo further argued that while the northern elders were able to prevail on their youths “and the matter had since been resolved”, the same cannot be said of Ohanaeze which, he argued, had failed to control the excesses of IPOB and other South-East youths.

Ohaneze however found support in the Pan-Yoruba socio-cultural group, Afenifere, which accused the Federal Government of not being fair in its handling of the Kanu issue. In a statement, the group’s publicity secretary Yinka Odumakin said Kanu’s re-arrest would amount to double standard becausethe government failed to arrest the Arewa youths who issued a quit notice against the Igbos but wants now to re-arrest Kanu for violating his bail conditions.

There are a number of issues in the government’s plan to re-arrest Nnamdi Kanu and the interventions by the aforementioned ethno-cultural groups:

One, a crucial question that some people often ask is whether ethno-cultural groups like Ohaneze, Arewa Elders and Afenifere are forces of stability or disunity in the country. It can be argued that these groupings play both roles simultaneously. For instance because protecting the interest of their members is the raison d'état of their existence, it can be argued that their primary job is to fish for instances of injustice against their members and to magnify whatever they can find in order to both justify their existence and to call attention for their redress. In this sense they are part of the centrifugal pulls in the country. However because virtually every ethnic group or region has its own ethnic association and umbrella association doing essentially the same thing, they cancel and countervail one another. To these extent ethno-cultural groupings such as aforementioned are also forces of stability, which can be creativelyutilized to reach disparate members of an ethnic/regional group.

Two, part of the countervailing functions of ethno-cultural groupings is the competition to occupy the moral high ground. This often manifests in their routine accusations of elders of opposing groups of ‘failing to call their youths to order’ - as if those elders have any magic wand for doing so or as if the disconnect between the young and the old is not nationwide. For instance, under Jonathan, it was not uncommon for the various Southern ethno- cultural groups to accuse the Northern elders of not speaking out enough against Boko Haram or calling them to order (implying that they were complicit in their activities). Now, some Northern elders are doing precisely the same – accusing Igbo elders of not doing enough to rein in Nnamdi Kanu and his controversial rhetoric – as ifthey can.

Three, what is obvious from the Nnamdi Kanu case is that the government has a lot to learn about managing the optics of governance. To give a simple example: in a lecture I gave at the Institute of Security Studies, Abuja, on November 21 2016, I told the participants at the seminar that while I disagreed with their decision to swoop and arrest judges at inhuman hours I must give them credit for demonstrating a good understanding of identity politics in Nigeria. In fact by ensuring that the judges they arrested ‘reflected the federal character’, noone was able to bring accusations of ethnic bias into the discourse. Certainly the government would have escaped this latest round of accusation of bias if it had summoned both the Arewa Youths and IPOB for either a peace parley or for aharshpublic rebuke when the quit notice was given. The government failed to seize the moment.

Four, while I believe that Kanu has violated his bail conditions, asking the court to re-arrest him now will furtherboost him at a time when the contradictions between his group and the larger Igbo society (as typified by their contradictory stances on the Anambra election) may begin the process of his demystification. Suddenly Ohaneze forgot its differences with Nnamdi Kanu and came to defend one of its own – as such groupings are expected to do. The crucial question for the government is why Kanu’s detention for two and half years has turned him into a cult figure among his supporters while the detentions of Ralph Uwazuruike and Benjamin Onwuka – leaders of MASSOB and the Biafra Zionist Movement respectively for similar durations – were largely ignored by the Igbo elite. While I believe that this government often has good intentions in its programmes, it does not seem to sufficiently understand the force of identity politics in the country – how it is stoked and its dynamics.

Five, every ethnic group in the country is both a victim and victimiser when it comes to hate speech. Curbing hate speech is extremely difficult partly because of the blurred boundary between it and other forms of speech, including offensive speech, which, though can shock and awe, are accepted as contributing to the vibrancy of the marketplace of political ideas on which the democracy infrastructure itself rests. One of the time- tasted ways of curbing offensive and hate speeches is to deny their purveyors platforms that could be misconstrued as mainstreaming their views.In this sense, it is befuddling that the Nigerian Union of Journalists’ office in Enugu was allegedly used by IPOB sympathisers for a press conference and that Arewa House was used by Arewa Youths for their quit notice – and these places were not sanctioned. In the same vein the radio stations that played the anti-Igbo songs ought to be seriously sanctioned such as the heads of such stations being fired to send a message. While I believe it would have been a wrong move to arrest Arewa Youth as that would have further inflamed passion, the government had several tools to play with to douse tension. True Kanu spewed hate speeches but that was partly why he was detained for two and half years.

Six, I have always argued that unless inflamed, the contradictions within the separatist movements would ensure that most will wither on their own. Once Kanu was released from detention, honest conversations among Igbos began on the Biafra agitation with most mainstream Igbos apparently opposed to his brand of agitation. Again several of the areas Kanu annexed into his vision of Biafra were beginning to reject their inclusion in his geography of Biafra. In the same vein, Benjamin Onwuka, leader of the Biafra Zionist Movement, who was detained in 2014 and released only in February this year, apparently sensing that Nnamdi Kanu had seized the space for Biafra agitation while he was in detention, quickly proclaimed a Republic of Biafra (with himself as interimPresident). He also appointed interim ministers, including from Nasarawa and Niger States – states that are not contiguous to Kanu’s geography of Biafra. All these contradictions are still playing out when the new threat of re-arrest came, again submerging them and boosting Kanu’s stature in the Biafra agitation space. In essence the only winner in the threat to re-arrest Kanu is Nnamdi Kanu. And that is only because the government has still a lot to learn about the role of optics in managing a polarized and low trust country like Nigeria. Fortunately the grandmasters of the game – Obasanjo and IBB – are still around and a phone call to them on these issues will do the government no harm.

CORRIGENDUM
In my column last week, I mixed up the names of Ralph Uwazurike, founder of MASSOB, with that of Professor Chudi Uwazuruike, a highly respected scholar and former member of the House of Representatives. The mix-up is seriously regretted.

Disclaimer: "The views/contents expressed in this article are the sole responsibility of the author(s) and do not necessarily reflect those of The Nigerian Voice. The Nigerian Voice will not be responsible or liable for any inaccurate or incorrect statements contained in this article."
Articles by Jideofor Adibe
19-10-2017  In Search Of The ‘detribalized’ Nigerian27-7-2017  ‘restructuring’ Is Just Another Empty Buzzword20-7-2017  The Mantra, ‘nigerian Unity Is Not Negotiable’, Is Pseudo-nationalism29-6-2017  End Of Right-wing Populism?22-6-2017  The New ‘generation Shift’ MantraMore...