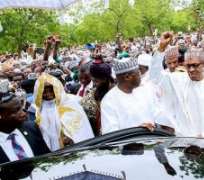 President Muhammadu Buhari on Wednesday arrived his country home in Daura, Katsina State, where he is expected to celebrate Eid-el-Kabir.

The president who is visiting his home town for the first time since returning from three-month medical sojourn in UK was welcomed by a huge crowd of enthusiastic supporters, family members and well wishers.

Obviously elated president preferred  to walk through the street from the helipad as an overwhelming crowd surged to welcome him.

According to Garba Shehu, SSA on Media and Publicity, the President, who was received at the helipad by the Emir of Daura, Alhaji Faruk Umar Faruk, abandoned the motorcade as a large number of people had already gathered around the helipad all the way to his house. An elated crowd cheered as the President walked home, screaming “baba ya da wo, baba oyoyo”, meaning “baba is back, welcome home”.

President Buhari was earlier received at the airport in Katsina by the Executive Governor of Katsina State, Alhaji Aminu Bello Masari, and the Emir of Katsina, Alhaji Abdulmumini Kabir Usman, before he was airlifted with a chopper to Daura.

The President will be spending time in his home town with his family and close associates during the Eid-el-Kabir.