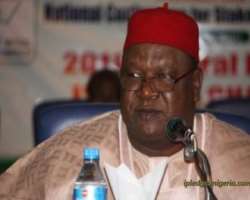 ABUJA, May 31, (THEWILL) - President Goodluck Jonathan is now under intense pressure to make up his mind on who replaces Prince Vincent Ogbulafor as National Chairman of the Peoples Democratic Party (PDP).

This is because a new chairman is expected to be named at the next NEC meeting scheduled to hold this week.

By virtue of being the highest political office holder in the party Jonathan is the leader of the PDP and as such holds the ace on the matter.

The President it expected to break the apparent lock jam that has occurred with the emergence of two powerful groups each having very strong links with the Presidency.

Though the President at a time was said to have favoured Nwodo, there is now intense pressure on him to rescind that preference following insistence by some influential members of the party that Nwodo should not be given the job as he is facing criminal charges over alleged fraud in the national identity card scam alongside late former Minister of Internal Affairs, Prince Sunday Afolabi.

Those against Nwodo are insisting it will be out of place to endorse Nwodo against PDP position that anybody under criminal investigation should not hold executive position in the party.

They argue that it will be inappropriate to replace Ogbulafor who was forced to resign over charges of corruption with another person facing such charges in the court.

THEWILL gathered that the Anyim group has started making serious in road into the Presidency as they are also backed by the PDP Reforms Forum led by former Senate President Ken Nnamani and a camp loyal to former President Olusegun Obasanjo.

Both groups are said to have played major roles in the emergence of Jonathan as Acting President which paved the way for his smooth ascendancy to the position of the President at the death of late President Umaru Yar’Adua.

Anyim is also said to be backed by Deputy Senate President Ike Ekweremadu and this is a very important factor as he is the leader of the South East Caucus of the PDP being the highest political office holder from that zone.

However it was gathered that the Nwodo group is now making frantic efforts to position another candidate in case the President rejects his nomination.