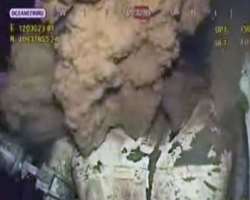 PHOTO: DRILLING MUD PUMPED INTO THE LEAKING PIPE BY BP ESCAPES FROM THE GUSHING OIL WELL IN THE GULF OF MEXICO. PHOTO: AP
Listen to article

BP's "top kill" attempt to stop the flow of oil from a ruptured well in the Gulf of Mexico failed, the company's chief operating officer said Saturday.

The oil giant has tried for days to stop the largest oil spill in U.S. history by pumping heavy, mud-like drilling fluid into a ruptured oil well, a method known as "top kill."

The next option is to place a custom-built cap known as the "lower marine riser package" over the leak, the company's chief operating officer, Doug Suttles said. BP crews were working Saturday to ready the materials for that option should it become necessary, he said.

"We've been prepping that all along in case we need to move to that option," he said.

"People want to know which technique is going to work, and I don't know."

And if "lower marine riser package" were to fail, he said, BP engineers would try placing a second blowout preventer on top of the first, which failed to cut of the oil flow after the April 20 explosion of the Deepwater Horizon rig. The failed blowout preventer is a 48-foot-tall, 450-ton apparatus that sits atop the well 5,000 feet underwater.

Meanwhile, teams in Louisiana were working Saturday on a clean-up project aimed at protecting coastal marshes while BP continues its efforts to stop oil from gushing into the Gulf of Mexico.