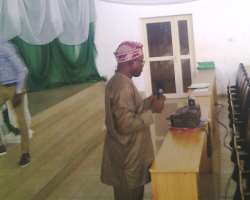 The Chairman of Sickle Cell Spport Society of Nigeria, SCSSN, Prof. Kunle Adekile, has tasked the Federal Government to pass a Sickle Cell Act to combat the burden of the disease in the country.

Prof Adekile, a paediatric haemotologist said this at the 2017 SCSSN conference held Friday in Enugu.

In his lecture titled: Setting the Research Agenda for Sickle Cell Disease in Nigeria, the professor said that there would be very thin efforts towards achieving the optimum treatment and management of sickle cell disease without a national policy for the care, control and management of patients with this disease.

He stressed that the chunk of the problem lies on leadership (the government) to make a policy that will ensure that the government channels resources to both the rural and urban centres for effective result, appealing to the government to act now than ever before.

“About four years ago, there was a bill presented to the National Assembly in the control and management of sickle cell disease. The bill was very comprehensive, with the hope that the government key into the idea and consider the bill but till date , that bill has not gone past the committee stage.

“We appeal to the government that the time to revisit and possibly pass the bill is now," he said.

The professor however pointed out that the government has made efforts in curbing the sickle cell disease, adding that the efforts are not enough to tackle the situation in the country.

“In the past, the government established six sickle cell centres at different parts of the country for the screening of patients but six centres are not enough. There is need for a real commitment from the Federal Government, else, a lot of SCD patients will die before they are five years old. The government need to know that early diagnosis is crucial to the care and survival of patients hence, a concerted effort from the government to revisit the bill and make sure it is passed into law.

He called on the government to make this policy in order to guarantee patients of full and timely treatment, as some States; Anambra and Delta are doing to monitor the situation.

He said that efforts from individuals to reduce the burden of the disease over the years have proven credible but inadequate. He also appealed to philanthropists and interested stakeholders to have their own programmes for sickle cell disease control and management in their environment.

Sickle cell disease is a problem globally, particularly in Africa, with Nigeria having the highest burden of the disease as against the situation in other countries. The disease is not well known like malaria, AIDS or tuberculosis, but tons of babies born each year around the world inherit this blood disorder, with the number expected to increase, according to NPR(2013).

The disease is got by inheriting two copies of a defective gene from each patient. The red blood cell gets collapsed, forming a crescent moon-like shape, making it difficult for the transportation of oxygen to the rest of the body.

"The disease is so pervasive and many patients live in rural communities," he said. There is need to address the problem from the scratch."

The professor maimtained that it is pertinent to take the care and control of SCD to the communities, stressing that training of community health workers will be crucial to early recognition, making diagnosis, prescribing and identifying when patients have problems.

On what can be done par tem, he said that there should be health education, counselling and proper dispensing of routine medications to prevent SCD.

Prof. Adekile said that as a body, SCSSN was established with the need to raise awareness in the society, conduct research and collaborate with different sectors in Nigeria or capacity building and to encourage young and qualified Nigerians to work towards the treatment and research into new trends in SCD.

On the part of the patients, the Don said patients should be given supplements to boost their blood and to recognize the best time to send patients to the hospitals for treatment.

He however called on the society not to stigmatize patients with the disease, stressing that with the passage of the SCD ACT, nine out of ten patients will live to an old age.

He encouraged people with the disease to identify and speak out, rather than hide the disease from medical bodies. He advised patients with sickle cell to come together to form a society, pointing that they will be heard if they speak out.