THE "INNOCENCE" OF DIEZANI ALLISON-MADUEKE. 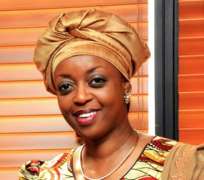 Yes, I may hate corruption. Yes, I may dislike Diezani Allison Madueke, but I refuse to buy the stories of protected thieves like Ibrahim Magu, the so-called EFCC chairman. I refuse to buy anything that comes out of House of Lies called Aso Rock. I refuse to believe in the guilt of Diezani. I refuse to join the proverbial Roman crowd to shout "Crucify her! Crucify her!" No! You can take it or leave it. Or if you like as usual, abuse me.

The continued media propaganda against Diezani has ulterior motives. It serves not the interest of the people except some Hausa Fulani oligarchs who are upset that a Southerner, and a woman for that matter, had the effrontery, the audacity, the courage, the bravery and the boldness to participate in the so called looting, something considered an exclusive preserve of their own. They want to make her pay for it.

From my own understanding, this is the crux of the matter. And for this reason and others, I refuse to accept the GUILTY VERDICT against Diezani. Even when pronounced guilty in a Nigerian Court of Law, I will refuse to buy it until Mohammadu Buhari is arraigned and tried. Or Lamido Sanusi. Or Ibrahim Babangida. Or General Abdulsalaam. Or Olusegun Obasanjo. All of them have stolen from Nigeria.

More so, until she is convicted in a court of law, it remains what it is, an ALLEGATION. There are so many allegations of corruption against MOHAMMADU BUHARI with a lot of EVIDENCE in the public space. But because he was never convicted by a court of law, he is the President of the God-forsaken country today.

In addition, the majority of those who have stolen our money are of the Hausa Fulani stock. Nothing has happened to any of them . They are still stealing Nigeria dry as we speak and nothing is happening to them. So, why Diezani? Is it because she is a Southerner? Or because she is a woman? Why Diezani? Why?

When Buhari was asked to defend himself at Oputa Panel over the $2.8 billion that disappeared under him as Minister of Petroleum among other crimes, he baulked and acted above the law. He refused to show up. He knew he would be found wanting. He dodged it. No one says nothing about that. Now everyone is opening their mouths to vilify Goodluck Jonathan and Diezani as if they are the only corrupt people in Nigeria.

What did GEJ do that Buhari has not done worse? What did Diezani do that the Hausa Fulani thieves have not done worse since 1960? Who are the real thieves in Nigeria beyond the Hausa Fulani oligarchy and their sentries all over? What kind of conscienceless people would apply different rules for the same crimes? What kind of evil crowd would cheer on this kind of odious hypocrisy?

It is more annoying when you realize that the PETROL which provided all the stolen money comes from the Southsouth. All the money came and are still coming from Jonathan and Diezani 's homeland. If the Hausa Fulani are entitled to steal the money why not GEJ and Diezani? Why not them?

Buhari and his Fulani brethren have been stealing our money since 1960 while the core North produced nothing. Now just for once, a Southerner or Southsoutherner, has a little chance and they want to bring the World to an end? They could not even bring charges against her. They keep trying her in the media. They keep blackmailing her. They keep lying against her in most situations.

For your attention, all fake corruption fighters, NOTHING is gonna happen to DIEZANI ALLISON -MADUEKE in Nigeria. Can't say anything about anywhere else. As long as BUHARI, or IBB or Abacha or his family and all the HAUSA FULANI thieves who have been stealing our money since 1960 did not go to jail, NOTHING MUST and NOTHING WILL happen to GEJ and Diezani. Until we break the useless country up, we are in the "shit" together.

I am tired of HYPOCRISY. I am tired of UNFAIRNESS. I am tired of IMBALANCE. I am tired of fake SUPERIORITY COMPLEX. We either fight corruption or leave it. No selective JUSTICE. Corruption did not start under GEJ and obviously, it has continued under Buhari. You can all hala all you want, MAGU knows what he is doing. He would not dare cross the line. He cannot, because he is aware of the consequences. If you can't try Buhari and others, please, leave Diezani alone.