The group was reportedly attacked by hoodlums after their entrance into the market and gun shots were heard.
By The Nigerian Voice 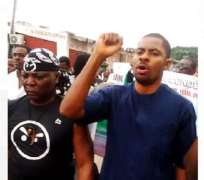 The 'Resume or Resign' protesters agitating for the return of President Muhammadu Buhari have been attacked for the second time since they started their protests last week.

The group, led by entertainer and activist, Charles Oputa, popularly known as Charly Boy, was reportedly attacked with stones after they protested at the popular Wuse market in Abuja on Tuesday, August 15, 2017.

The group was reportedly attacked by hoodlums after their entrance into the market and gun shots were heard in the chaos that ensued.

The attack was confirmed by Deji Adeyanju, leader of the 'Concerned Nigerians' group who have also been taking part in the protest.

Taking to his Twitter account (@adeyanjudeji), he tweeted, "We just went to Wuse market for mobilization against 100 days event tomorrow & a regular face at Unity Fountain brought thugs to attack us."

Adeyanju also claimed in another tweet that Charly Boy's car was damaged by the thugs that attacked the group. Charly Boy's wrecked car
(Twitter/@SaharaReporters)
According to people on the scene, the market was locked down while the police tried to resolve the situation.

On Tuesday, August 8, the group was attacked by the police at Unity Fountain with tear gas cannisters and water cannons, in a move that was roundly criticised by the Nigerian public.

The group has been staging a sit-out protest at the Unity Fountain since Monday August 7, demanding that the president should either return to the country he left over three months ago, or resign from his position. Charly Boy during the anti-Buhari protest
(Facebook/Deji Adeyanju)
On Thursday, August 10, pro-Buhari groups, like the Coalition for Good Governance and Change Initiative, marched the streets of Abuja in support of the president who has been out of the country for 100 days.

On Friday, August 11, both groups met at Unity Fountain, and trouble almost broke out before it was promptly contained by the police.

President Buhari left the country on May 7 to resume treatment for an undisclosed illness in London, leaving Acting PresidentYemi Osinbajo in charge of the country's affairs.

The president has said he is completely healthy and is only waiting for a clean bill of health from his doctors before he returns to the country, but there has been no confirmed date for his return.