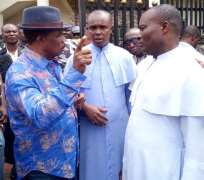 The Renascent Anambra Transparency Democratic League (RATDL), a socio-political transparency advocacy group based in Awka, Anambra State has condemned the orchestrated smear campaign and partisanship displayed by Intersociety, an Onitsha based organization which is alleging complicity by the governor of Anambra State and the security agencies in the unfortunate Ozubulu massacre.

The disgust over the Intersociety claims was expressed during a chat with newsman in Awka today by a political analyst and Coordinator of Renascent Anambra Transparency Democratic League (RATDL), Comrade Chuma Nweke, who said that it has become necessary to go public with the condemnation following a spate of misleading public commentary on the shooting incident which are fuelled by politically motivated and unfounded by persons and groups like Intersociety, which though claim to be ‘rights group’ but are funded by political opponents to rupture the peace and tranquillity across the state at a time sober reflection and mourning.

According to the groups statement, “We condemn the shameless display of partisanship, resort to bare-faced lies, blackmail and false activism by Intersociety; a ‘rights group’ which operates out of the commercial city of Onitsha which has once again shown its hypocrisy with a statement titled “Gov. Obiano, Anambra Police chiefs linked to man blamed for the church massacre.” The glaringly biased report is another opportunistic attempt by the group to exploit the recent unfortunate incident in Ozubulu to smear the governor of Anambra State and the security agencies just to further the interest of their sponsors.”

Comrade Nweke queried: “Why would any self-respecting and ‘independent’ organization embark on a reckless and unfounded allegation against a governor because his official picture is on a board announcing the commissioning of “humanitarian projects,” by the alleged party to the Ozubulu mayhem, and frivolous claim about the fellow being made “political leader” in his community. If not share mischief how does this baseless claims make the governor complicit in the actions of private citizens?”

The democratic league commended what they saw as “the governor’s selfless display of non-partisan leadership in time of crisis and the shameless opportunism by the Intersociety, which is on a mission to find fault and incite a section of the citizenry through its baseless claims.” While stressing that “it is common knowledge in political circles that Intersociety is funded by a former governor in the state to further political interests, attack opponents while masquerading as a rights organization and advocate of the masses. But one would have thought that they would at least respect the spirit of the dead especially the innocents caught in the cross-fire at Ozubulu.”

RADTL leader also called on responsible citizens to join them in condemning “brazenness, lack of guile and reckless actions of Intersociety officials led by one Emeka Umeagbalasi, and his cohorts who allegedly “made overtures to officials of the current government in Anambra State seeking the continuation of a pre-arranged slush funding scheme which allows them to wet their beak every month at the expense of hapless Anambrarians.”

The group also called on the security agencies “to step-in and investigate these purveyors of falsehood for inciting the public through concocted stories. This would help prevent the degeneration of the public discuss on the Ozubulu incident and help preserve the peace.”