OZUBULU KILLINGS & THE NEED FOR MORAL REBIRTH IN OUR RELIGIOUS INSTITUTIONS NOW! 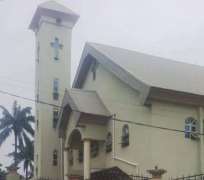 Recently, the acting President Professor Yemi Osinbajo had cause to raise issues about how the church had contributed to the moral decadence in the society by money glorification, rather than morals and spiritual exhortation which is quite obvious and sad.

Unfortunately, some persons would rather we be hypocritical, keep quiet and behave like the proverbial ostrich which buries it's head in the sand, while the rest of the body is in the open. To this category of persons, it is sacrilegious for us as Christians to openly critique what the church has become in our society today.

However, right before our own very eyes, the chicken is already coming home to roost about the danger being poses to our society by the church with the drug gangs war between Anambra indigenes based overseas, precisely South Africa which led to the invasion of a church, built and donated by a widely acclaimed drug baron in Ozubulu, Anambra state on Sunday August 6th 2017, in which lives were lost and many injured, not to talk of the trauma that the people are presently undergoing as a result of the tragic incident which must also be addressed in due course.

However, to those who wants us to pretend and keep quiet about the menace being constituted by the church in modern day Nigeria which has failed in its primary obligation of spirituality, of reforming man to live a life that will make him an inheritor of the kingdom of heaven, one's questions are the following:

How can we rationalize a supposed house of God being built and donated by a widely acclaimed drug baron who has not repented from his illicit business of drugs dealing?

How did we get to this stage that our religious institutions that have a primary responsibility of engineering and upholding the spiritual cleansing for a holy and pious soul in a body vulnerable to sin by man, to inherit the kingdom of heaven are the ones now corrupting soul and body by the immoral appetite for materialism?

Is it not in the church, in the temple that Jesus entered and cast out all them that sold and bought in the temple and overthrew the tables of the moneychangers, and the seats of them that sold doves and he said unto them, "It is written, My house shall be called the house of prayer; but ye have made it a den of thieves"? Matthew 21: 12-13.

If Jesus Christ our Lord and Savior should come today as we are admonished to keep vigil because no one knows the hour or day of his second coming, will he claim that a house built with the proceeds of drugs that we are all aware of, is the temple of God?

Will Jesus Christ even enter some of our places of worship that should better be described in his words, as den of thieves?

These and many more are the questions puzzling one's mind since the tragic and sad incident of St. Phillips Catholic Church Ozubulu, Anambra state of which if you ask me, the blame for that killing should be placed squarely at the doorstep of the church for sacrificing innocent souls in search of spiritual exercise all for the filthy lucre of materialism because if the church had not sacrilegiously bowed down to Satan by allowing the proceeds of crime against God and man to be used in building a supposed "church", who knows, the gun man or men might not have had the effrontery to defile a holy place to commit mass murder.

However, while acknowledging the failure of the church in living up to its responsibility as a factor for the mess in the society, we cannot run away from the indisputable fact that the greatest culprit for our sick society today is the family which has failed completely in playing it's fundamental role as the unit of cohesion and beacon of moral values in any society.

The child who steals, tell lies, commit rape and is involved in other societal unapproved conducts is a product of a dysfunctional family and will thus grow up to become a big time criminal engaging in armed robbery, rape, kidnapping, drug dealings, assassination, corrupt practices and other acts inimical to the good of society which dovetails into a dysfunctional society.

Therefore in the midst of the dysfunctionality of the society, as adherents of religious doctrines, be it Christianity or Islam or other religions, we have a great burden on our conscience to introspect on where and when did we miss it as adherents to have deviated from the teachings of the Holy books which admonishes us to live a holy life in the image of our creator and inherit the kingdom of heaven, to one of materialism of money worshipping and destruction of body and soul?

The time to do that, is now because tomorrow maybe too late!