Forgiveness as a veritable conflict management tool in marriage 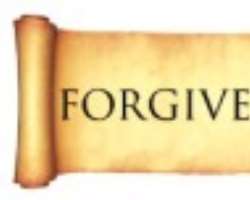 Forgiveness, according to the Webster's Dictionary, is defined as the ability to excuse or to pardon.Furthermore, to forgive is to offer opportunity for a new beginning to the offender, and provides a process of healing for the victim.

One institution where forgiveness as a veritable instrument of conflict management is in dire need is marriage. Recently, marriage, which is one of the institutions established by God in Eden, crashes with reckless abandon. Even our legal instruments are not helping matters as they are employed easily by those who preside over our law courts to dissolve marriages- without recourse to the biblical injunction" what God has put together, no man should put assunder".

The consequences of broken home are multi- dimensional. It affects virtually al, parties associated with the marriage-the children, father, mother, even the extended family. If these implications were put into consideration before parties to the marriage opt for divorce as a last resort, they couldn't have contemplated divorce.

On the side of the woman, it inflicts a perpetual stigma that would be hard to shake- off. She is ridiculed in the compound, the streets, the markets, and whereevr she goes. To say that the experience would subject to an object of caricature is an understatement. If strict caution is not applied, both parties- the manm and the woman- would be exposed to promiscuity. The consequence in this direction is that either or both parties may be vulnerable Sexually Transmitted Diseases (STDs), and if care is not taken may fall victim of the dreaded Human Immune Virus (HIV), which graduates to Acquired Immuno Defiency Syndrome (AIDS). If the situation degenerates to this abysmal level, the children would be rendered orphans and face a very bleak future.

The multi- million question here is:"Why didn't the either or both parties of the coonflict explored the theme of forgiveness before the conflict degenerated. Conflict is ineveitable in every human relationship- be it indidividual or corporate. What is important is how the conflict is managed. A badly managed conflict degenerates and leaves sour taste on the mouth of the parties. The Chinese see conflicts as opportunities to improve harmony in relationships. On the other hand, since ambition, interest, perception to issues, ego, differ in relationships, conflicts are bound to take place.

Also, the theme and benefits of forgiveness have been deeply explored in religious thought, the social sciences and medicine. Forgiveness may be considered simply in terms of the person who forgives including forgiving themselves, in terms of the person forgiven or in terms of the relationship between the forgiver and the person forgiven. In most contexts, forgiveness is granted without any expectation of restorative justice, and without any response on the part of the offender. In practical terms, it may be necessary for the offender to offer some form of acknowledgment, an apology, or even just ask for forgiveness, in order for the wronged person to believe himself able to forgive.

Forgiveness is a key component in the teachings of Christianity and is classically expressed in “Our Lord’s Prayer” thus:” And forgive us our trespasses, as we forgive those who trespass against us” ( Matthew 6:9-13). Jesus Christ, who is the model of Christians, in his final words on the cross of Calvary laid strong emphasis on forgiveness:”Father, forgive them, for they know not what they do.” (Luke 23:34). We also find instruction to love your enemies and turn the other cheek .Also; we are enjoined in Luke 6:27-31 to” love our enemies, do good to those who hate us, bless those who curse us, pray for those who curse us, and pray for those who hurt us”. Forgiveness is a recurring theme in scriptures such as Colossians 3:13” Bear with each other and forgive one another if any of you has a grievance against someone. Forgive as the Lord forgave you”;Matthew 6:14-15” For if you forgive other people when they sin against you, your heavenly Father will also f

Gandhi’s commitment to nonviolence and forgiveness of his enemies attracted huge following from the Indian populace and endeared other notable rights activist Dr. Martin Luther King in the United States, Nelson Mandela and Steve Biko in South Africa, and Aung San Suu Kyi in Myanmar to follow his lead. Gandhi would always proclaim “The weak can never forgive. Forgiveness is the attribute of the strong”.

ssion. Compassion generates peace, tranquility, humility and co-operation in human interactions. Like the antithesis explains” To err is human, to forgive is divine, “The act of forgiveness is considered a divine gift, not the work of human agency”.

The theme of forgiveness is beautifully expressed in the prayers of St. Francis of Assisi’s“Oh Divine Master, grant that I may not so much seek to be consoled as to console. To be understood as to understand. To be loved as to love. For it is in giving that we receive. It is in pardoning that we are pardoned. And it is in dying that we are born to eternal life”.

It is important to recognize that the ability to forgive does not make us better than the offender, rather, it demonstrates the wisdom of the forgiver in dealing with the issue. >To forgive is to offer opportunity for a new beginning to the offender, and provides a process of healing for the victim.