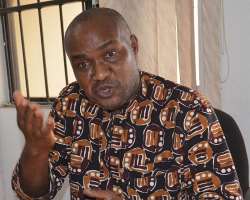 Question: Reaction towards the killings of Nigerians by some hoodlums?

Onwubiko: First and foremost, we are worried that Nigeria is becoming a very porous nation in terms of security. Recently, there were two reports from two different global organizations; one of them is World Economic Forum and the other one is Global Peace Index Report obtained in 2017 by an international organization based in the western world and one of it rated Nigeria as the 5th most dangerous nation in the world to tourists.

The World Economic Forum says Nigeria is number 5 out of the 20 countries that were rated as being very dangerous for tourists to visit. The reason that the World Economic Forum says that Nigeria is dangerous to visit is because of the existence of Boko Haram terrorists and the Islamic State's terrorists. But I think it is even far much more than that maybe they are looking at it from the international dimension. If you look at it from the local dimension the question you asked comes in; the issue of breakdown of law and order in Nigeria is very disturbing. People get killed by different kinds of armed hoodlums and the law enforcement capacity of the police seems to be compromised. For 70 days and still counting, 6 students of a model school in Epe Lagos were kidnapped by armed hoodlums but all the security forces have s far failed to secure or rescue these young boys whose parents have already paid over N35 million ransom to these dare devil kidnappers.

The policing institution in Nigeria, the armed security services or Forces in Nigeria are not serving the interest of the generality of Nigerians, they seem to be serving political interests otherwise why should an innocent female preacher in Kubwa Mrs. Felicia, she was murdered in cold blood here in Abuja and 1 year now that this woman was brutally killed by suspected Islamic fundamentalists yet no prosecution of any of the killers?

The FCT police command has spectacularly failed to arrest even a single person and not a single police high ranking officer has been sanctioned. In fact the people that were arrested immediately after the incident happened because when the woman was discovered to have been killed it was reported that one of the son's of that woman was even among a crowd of footballers where some of those little boys were now narrating how the woman preacher was killed in front of a mosque in Kubwa.

Those who were picked up by the police were almost immediately released and till now nobody has been prosecuted for that offence. In fact the political dimension that have been put into it and the moment you mentioned Islamic fundamentalist people will start to read some kind of sectional or religious meaning into it.

What about Kano state where a 72 year old woman was killed Mrs. Agbahime, a woman from Imo State who has lived all of her life with her husband in Kano and her husband being a pastor of the Deeper Life. She was killed because she was said to have allegedly blasphemed the Holy Prophet of the Muslims, so the unruly boys within the market conspired among themselves to kill the woman in broad daylight with Police operatives watching and the police command of Kano has been unable to prosecute anybody.

In fact those that were arrested and detained and even taken to court, the court on the advice of the Director of State Prosecution they were said not to have any case to answer and they were just discharged and acquitted. Kano State government officials from top to bottom have the blood of this innocent lady in their hands. Sadly, her State government of Imo has also not done anything to obtain justice for this murdered Imo state lady. Rather the Imo state governor was invited by the Kano state governor and a street was named after him in Kano even ad the case of the murdered Imo state citizen never came up.

So, Nigeria is a very dangerous place for any human being to even live. One of the reports said Nigeria is number 5 while the other said Nigeria is number 15 and it's quite unfortunate that Nigeria has got to this stage. If you look at the issue of breakdown of law and order it is not just limited to the north. In Lagos state for instance, in Ikorodu where a cult group that is identified as "Badoo" have been on the rampage for over a month and they have killed over 50 people, innocent civilians that were killed and the police has been unable to arrest the trend. The police have to rely on an informal outfit, the oudua people’s congress (OPC) to now start arresting some suspected members of that cult group but before it got to that, the victimized civilians have now taken the laws into their hands by killing suspects instantly. The law enforcement capacity of the policing institution in Nigeria is very questionable.

Question: Do you think that the threat by Northern groups will bring back Civil War in the country?

Answer: Well, nobody should ever think of another war in Nigeria but it's quite unfortunate that the security forces have failed Nigerians largely. A group of youths masquerading as Northern youths issued a threat of expulsion that a section of this country should leave the North and also called for the balcanisation of Nigeria. They did not just issue a quit notice to Igbos, they also said Nigeria should disintegrate. This is even worse than campaign for self-determination because self-determination could mean calling for confederation and confederalism is just like another different form of government different from federalism which is allowed. Self-determination could mean if you give the region greater autonomy and you weaken the center.

Self-determination does not necessarily result to the creation of an independent state out of Nigeria but even those who are championing for the creation of Biafra they have so far used constructive and peaceful means to go about their agitation. But this segment of persons masquerading as northern youths have called for the balcanisation of Nigeria and that they will do everything in their power to ensure that the expulsion order comes into effect on October 1st. As I am speaking with you now the government has done nothing in terms of real enforcement of the law. Do you have to wait for people to perpetrate violence or do you have to proactively arrest them and stop the violence from being unleashed? Nigeria is in a very tight situation now. Failure of leadership in the enforcement community is a threat to national security.

As we speak, there is an audio message in Hausa language calling for the killing of Igbos in the North and the government has not thought it wise to find out the people responsible for this kind of hate crime that is going on. Even the Chief of Defence Staff made it known that Nigeria is facing a terrible security situation. He said that Nigeria is facing about 14 different security challenges.

Question: What did you make of the statement made by the Chief of Army Staff; Lt. Gen. Tukur Buratai when the Malian Chief paid him a courtesy visit recently, saying Mali has now become a threat to Nigeria?

Answer: The global peace index rated Nigeria as the most dangerous place in the world that the Islamic States operates within the West Africa. You know that the Boko Haram terrorists have also affiliated itself to the Islamic State. In as much as it is a fact that the Iraqi government and other allied forces that have mass together to fight the Islamic State and try to eliminate the Islamic State from Syria it seems to be succeeding. But Islamic states in Africa are even expanding their stronghold and they are not just operating within the northeast of Nigeria but the western African region has become very volatile.

So, it's a fact that Mali has not done good enough to stop their homegrown terrorists from spreading terror all across the west African region. It is even unacceptable that you have a sub-regional joint security forces that fight Boko Haram and a member of the sub region seems not to be cooperating. I think what is likely that will happen is economic sanctions to be imposed on such a country if the country is not cooperating in the fight against terrorism in the West African region.

Question: How would you rate the fight against corruption by President Muhammadu Buhari?

Answer: The fight against corruption has a lot of challenges in itself. First and foremost the mechanism of fighting corruption has not been properly worked out. The Economic and Financial Crimes Commission (EFCC) is more or less engaging in media trial of suspects than in getting convictions in the court of law.

First and foremost the Nigerian government must respect the law, there are laws setting up those agencies and if the law says that for somebody to head that agency be it ICPC or EFCC if the person has to go through confirmation which the law says and I don't understand the reason why the acting President is committing an impeachable offence by insisting that Magu remains the chairman of EFCC even without confirmation and this is quite unfortunate that the man even identify himself as a professor of law and he can abuse the law and even undermine the credibility and integrity of the National Assembly.

Nigeria needs to set up an independent and strong anti-graft institution that is not used as the attack dog of any of the arms of government. The way it is now, the mechanism put in place to battle the scourge of anti-graft is unsustainable, morally depraved and ethnically shaky. The strategy lacks the people's ownership process. The people must own the process of anti-graft crusade. Media trial or showmanship is not the way to eradicate corruption. Fighting corruption should not be politicized the way it is now with the Ibrahim Magu's EFCC.

Recently the EFCC was enmeshed in a job scam whereby the hierarchy was caught offering more slots to the North where the acting chairman comes from. This breach of federal character principle is unconstitutional and amounts to corruption and nepotism. This must be reversed.