For Nigeria To Grow The Cabal Must Go 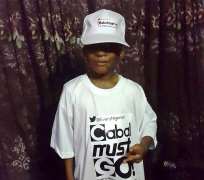 There is a spark of joy. At last there is hope. Hope, a thing forgone, but now there is hope and hope brings an upbeat smile. The people have long known the problem. It has haunted them since Nigeria's inception. Late Sage Fela Kuti sang, "few people dey part with big money and the rest dey hungry." Thirty years later, the same few people are still in charge of the country with their sons and daughters also inheriting all the power and promise. The rest are still hungry. The few share CBN jobs while the rest wait for UWin, SureP, NPower handouts and what have you.

But that is about the change. The people are banding together. They are singing the revolution song, "For Nigeria to Grow the Cabal Must Go!" An actionable song. A song in action. A song that tells the populace how to use their power...their vote. That teaches when to #HoldTheirVote in the powerful ultimate protest and when to vote in powerful expurgation. Register to vote to increase the number, but then hold, #HoldYourVote till they listen to our mandate. A song that tells the people...all victims in common, to unite on one cause, north, south, east, west.. There is no going back, the Cabal Must Go! They shall all go. The multitudes of poor masses are getting set to evict the hand full of rapacious Cabal. The niggardly Cabal are scampering around. They know their days are numbered.

Someone asks, "who is the Cabal?"
The Cabal include everyone who has ruled Nigeria before and been part of the entrenched system of corruption. The Cabal includes every private sector so-called businessman or woman who has inherited oil wells through Obasanjo's ungodly land-use decree that transfers land from its indigenous owners to friends of the government and their wives' tailors. It includes anyone who enjoyed government enforced oligopolies and the lack of antitrust regulation of business. The Cabal include Nigeria's legislators, unduly carving out a disproportionate share of Nigeria's common wealth while writing laws in their favor. It includes Executives, ministers and governors, all partakers in the enshrined system of looting while in government and continued looting via humongous retirement packages. The Cabal includes all government officials who rode in on the two major corrupt political parties, these politicians owned by the Cabal and betrothed to the same Cabal who thereby enjoy immunity from investigation and prosecution for their cumulative crimes against humanity. The Cabal are killers. Their looting has prevented our hospitals from working. Their looting bred the crime and deadly terror Nigeria is a first in the world in.

We know them all. They congregate in Minna and at Otta. Follow Dele Momodu to see their latest assembly. They fly in dozens of private jets that cost more to maintain than buy, and rally together while ensuring we are torn up in ethnic and religious sectarian strife, fighting each other and dying in our misery while they party in effulgence. It is because of them that we have IPOB fighting Arewa youth. It is because of them that Mohammad Yusuf spread the message of Boko Haram in promise to emancipate the people from the poverty he said western civilisation brought. They are founders of Boko Haram.

The Cabal live a First world life in our very same Nigeria. Study them in Victoria Island, Lekki and Abuja. Listen to the posh way they talk. Look at their fresh skin. View them drive past in their bomb-proof vehicles and fly in peace in their latest private jets.

Someone asked, "how is it that the Cabal stop us from progressing?"

Let's explain.
While a capitalist societal system is not by its nature the solution to the people's problems and always creates Cabal, Nigeria's capitalism is the worst in the world.

True capitalism encourages competition. In fact the governments protect competition seriously with "Antitrust" laws. See in Europe today as the EU is hammering down on German manufacturers for "operating a price fixing cartel" in violation of Antitrust regulations. In Nigeria this is not the case. With the political parties sponsored by the Cabal, the leaders of Nigeria serve the Cabal dutifully. The leadership of Nigeria siphons all promise of the nation into the pockets of the Cabal leaving the masses with nothing. The Jonathan fuel subsidy scam and Buhari FOREX subsidy scam are two identical examples. Competition is stifled by collaborative efforts of the Cabal with the government. It does not matter whether it is military or PDP or nPDP(APC). The result is the same – Cabal get all while the masses get none.

The government sells limited licenses to their Cabal friends and transfers Nigeria's assets to them at ridiculous prices, then grants them all sorts of bailouts, duty exemptions, tax cuts and what have you, to ensure that they become the world's billionaires and pay the government back by sponsoring their campaigns and buying their private jets.

As poor as we Nigerians are, we ask:
Why does "dot ng" domain name cost $100/year when "dot com" and all other domains worldwide cost just about $10/year?

Why does cement in Nigeria cost us $10/bag with the Dangote company declaring massive quarterly profits, when the global average price is $5/bag?

Why does it cost us one of the highest rates in the world to browse on our mobile devices, needful of 97% price reduction according to a new study by Strategy& , a unit of the consulting firm PwC?

Why do we not have pipe borne water in 2017?
Why can our refineries not work while a Nigerian Cabal who wishes to buy ours can set up a private refinery that will assuredly work?

Why?, why?, why?
The answer to all the above is the same: the Cabal. Everything is set up to give the Cabal maximal profit, like ritual money as a telephone Cabal once rejoiced; and everything not yet available is sabotaged in the interest of the Cabal.

Our quest for the restoration of True Federalism and the devolution of power with Nigeria restored to the 1963 constitution Parliamentary system of government, is blocked by the Cabal, scared for their investments of loot on both sides of the Niger and their little brains afraid they will not be able to make money if they do not have an all powerful Abuja to dance to their bidding. Indeed it was chief Cabal Obasanjo who introduced the weird presidential system we have that facilitates corruption as constitutional lawyer Robert Clarke SAN complained. See: http://nigeriapoliticsonline.com/let-us-go-back-1963-parliamentary-system-governments-constitution-clarke/

Even politics is owned and run by the Cabal. In Nigeria each party, PDP and nPDP(APC) charge over $130,000 for presidential candidacy forms. DailyMail made a news headline out of that Cabal scam that keeps out Nigeria's best and brightest political candidates. In the article they said,

"Political and legal analysts say the exorbitant rates in Nigeria are illegal, discourage popular participation in the electoral process and consolidate power among the wealthy elite." See more: http://www.dailymail..co.uk/wires/afp/article-2827576/Want-run-president-Nigeria-Only-132-000.html

But the Cabal hold on our political system does not end there. Even INEC is rigged by the Cabal. INEC charges a whopping $33,000 for the presidency form. Compare that to the wealthy United States where every man or woman can contest as the form is FREE. Yes, FREE!

The entire Nigerian political system is set up to make it impossible for the masses to get worthy leaders and legislators. You have to ride in on the backs of the Cabal who you will owe and commit to serve. This is why we see the Atikus, Obasanjos and Tinubus owning governors and senators across the length and breadth of the nation..

In terms of security or the lack of it; the Nigerian situation is again defined by these same Cabal who keep thousands of our policemen guarding them and their wives to the market, leaving our streets bare and prone to terror and kidnappers.

And when the kidnappers strike, the Cabal hastily pay or the government pays on their behalf to get them and theirs out of the den in under 2 days as I compiled before, while when ours are kidnapped they stay for months like the case of the Lagos Epe kids and tens of thousands with Boko Haram, if they do not die in captivity. See: http://newsrescue.com/bringbackourlagoskids/

We can go on and on, about he stranglehold of the Cabal on the system and how they and they alone have turned a nation of promise into a failed state with the world's highest level of poverty: over 90% living under $2/day according to NationMaster. See: http://www.nationmaster.com/country-info/stats/Economy/Poverty/Population-under-%242-a-day

Our kids will have a better future
We will not lament forever. We have lamented enough. The time for action is now. The French revolution was because of this. The US Trade Union riots against the "Robber Barons" was against this same cabalization problem. Today Nigeria's revolution by the have nots against the haves has started. The Cabal are being sent on self-exile. The people shall celebrate their true independence.

This is why across the land the people are chanting, "For Nigeria to Grow the Cabal Must Go!" Nigeria's next president must ride a tsunamic wave of the masses into office. He must be someone who detests the Cabal. Someone brave enough to eliminate them entirely in the fashion of Jerry Rawlings of Ghana.

This is why Dr. Perry Brimah is running for the office. Few understand the workings of the Cabal and detest them as he does. He has been singing the "Cabal Must Go" song for years. He penned articles on them since the Jonathan days. See: https://www.abusidiqu.com/stealing-killing-cabal-must-go-now-nigeria-free-peregrino-brimah/

Dr. Brimah has coined the term, "Compulsive Stealing Syndrome, CSS" to describe the insatiety of the Cabal and their compulsive need to loot more than they can ever spend. See: https://secure.saharareporters.com/2014/01/31/compulsive-stealing-syndrome-css-dr-peregrino-brimah

In 2015 he described the 8 steps of the Cabalization process: https://www.nigerianbulletin.com/threads/how-cabalization-works-in-nigeria-8-simple-steps.113455/

And today, after being scammed by the Cabal during the last election, only to find them in full presence with a wrecking hold on the Buhari-Osinbajo government, and protected by them even when they are indicted for stealing from internally displaced victims of Boko Haram and when $43 million is found in apartments rented by their wives, Dr. Brimah has sacrificed himself to lead the revolution to finally and permanently eradicate the Cabal. To frustrate them into self-exile and jail them the day God declares he be sworn in.

So join the swelling tide of hopeful Nigerians determined to be able to answer when their children, like little Victor Baba Attai (pictured clad in Cabal Must Go gear, making the victory sign) ask that "what did you do when Nigeria was eviscerated in the stranglehold of the gluttonous cabal?," who will be able to answer, "we drove them out of our country and retrieved our land and our assets as we sang, "For Nigeria to Grow the Cabal Must Go!"