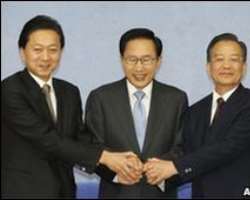 China has held back from censuring North Korea at a summit in South Korea dominated by the issue of a sunken warship.

South Korea has accused North Korea of torpedoing the Cheonan, which sank on 26 March with the loss of 46 lives.

Chinese Premier Wen Jiabao said the priority was to reduce tensions and avoid a clash over the incident.

But he did not mention North Korea by name or show support for possible UN sanctions against Pyongyang.

The three-nation summit was meant to focus on trade, but the sinking of the warship overshadowed other issues.

Seoul says it has overwhelming evidence to show that North Korea sank the Cheonan. It is seeking a unified international response to the communist state though the UN Security Council.

Japan and the US have offered South Korea their support – but it is veto-wielding China that is seen as key to what happens next.

'Defuse tensions'
Speaking at the talks, Mr Wen said avoiding conflict between the Koreas was “most urgent”, but did not apportion blame for the sinking.

“The urgent task for the moment is to properly handle the serious impact caused by the Cheonan incident, gradually defuse tensions over it and avoid possible conflicts,” he said.

“China will continue to work with every country through aggressive negotiations and co-operation to fulfil our mission of maintaining peace and stability in the region.”

China is North Korea's closest trading partner and the nation believed to have the most influence on it.

It has in the past been reluctant to take UN measures against Pyongyang out of concern it might destabilise the regime and trigger conflict or an influx of refugees across the border – but it is currently under considerable pressure to act.

On Monday Mr Wen travels to Japan for more talks with Mr Hatoyama.

The Japanese prime minister has pledged support for the South Korean president and accepted Seoul's conclusion that North Korea sank the Cheonan.

Japan has already said it is tightening its stringent sanctions against North Korea in response to the incident.

An investigation by international experts concluded earlier this month that the Cheonan had been struck by a North Korean torpedo, which split the ship in two.

North Korea has fiercely rejected the claim as a “fabrication” and threatened war if sanctions were imposed.

A North Korean defence spokesman said the country would “respond to reckless counter-measure with an all-out war of justice”, the state KCNA news agency reported.