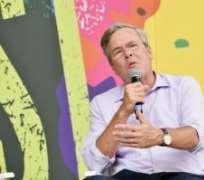 Speaking at OZY Fest in New York, Bush slammed Trump’s chaotic style of governance and failure to focus on his policy goals. He singled out reports that Trump recently suggested that he may attempt to pre-pardon himself to preempt a federal investigation by independent counsel Robert Mueller.

“You get disciplined when your team says, ‘No, Mr. President, let’s stay focused on these policy objectives,'” Bush said. “Don’t disparage people,don’t go after Mueller, don’t say you’re going to pardon yourself or whatever. Don’t do all that. Govern.”

At times, the governor appeared to slip back into campaign mode, saying that Trump didn’t always represent the Republican party, noting he was registered as a Democrat in the district where OZY Fest was being held.

He also said the 45th president wasn’t serving as a symbol for the country to succeed.

“The president is the prime minister and the king. He or she, eventually, will be the symbol of the country, and also the prime minister responsible for making government work,” Bush said. “And right now, our president doesn’t view that job as important. Look at history. History is important. When presidents inspire us, we do better. And that’s what we need to get back to.”

Asked to prognosticate on the 2020 election, Bush said it was too early to make predictions, noting that Trump changes the political conversation each morning with his tweets.

“He unleashed five tweets today about stuff that jeopardizes his legal situation, insults somebody, goes back to the 2016 election, none of which is relevant to getting tax relief done, regulatory reform done,” Bush said. “This is going to be a long ride between 2018 in January, much less 2020.”

But the Florida governor also reserved some ire for members of his own party, knocking Republicans who were scared of crossing interest groups or conservative base voters, and suggesting that there should be term limits for members of Congress to spur politicians to act without fear of political retribution.

“If Barack Obama did somethingas it related to Russia and you say, ‘This is outrageous,’ then when your guy does the same thing, have the same passion to be critical,” Bush said.

Bush, who did not vote for Hillary Clinton or Trump during the 2016 election, has been critical of Trump repeatedly since the president took office. In May, he praised the president’s appointment of conservative Supreme Court Justice Neil Gorsuch, but described the White House as chaotic, and advised Trump to “stop tweeting” because it gives “our enemies all sorts of nuances and insights” into Trump’s mind.

Though he ruled out another presidential bid, the former Florida governor appeared alongside a number of other former and potentially future candidates during the summit who were critical of Trump’s first six months.

Bush joined businessman Mark Cuban onstage later in the festival where they jousted briefly about education reform, and spoke after Democratic Sen. Kirsten Gillibrand of New York, who delivered a forceful argument for single-payer healthcare.

“My hope and expectation is some of the younger folks will come up and lead the way, but if they don’t, Jill’s running,” Biden said.