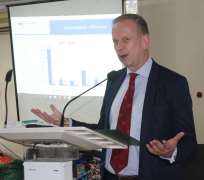 The Consul General of the Germany Embassy in Lagos, Mr. Ingo Herbert has assured the Economic and Financial Crimes Commission of continued support in combating corruption in Nigeria through regular training for its staff.

Speaking today at the opening of a 10-day capacity building programme on Corruption Control, facilitated by the German Government through Bundeskriminalamt (BKA) also known as German Federal Criminal Police, Herbert pledged adequate support for EFCC in in achieving its mandate. ‘’I read newspapers every day; I see that EFCC has taken up the challenge and is doing a great job. The German government is supporting through the German Police in contributing experts to share knowledge on how to better the image of Nigeria. One of the major reasons for this interaction is to bring back German Investments to Nigeria. It is known that many German companies left Nigeria, but presently, under President Muhammadu Buhari’s administration, German government believes and is aware of the conducive environment where business can thrive and security guaranteed,’’Herbert said. He added that one of his desires is to see the judiciary support and complement the anti graft agencies in winning the war against corruption.

EFCC’s Head of Operations in Lagos, Garuba Dugum, who represented the commission's Chairman, Ibrahim Magu, acknowledged the German government for their continual support to the EFCC. He urged the participants in the training programme to cooperate with the facilitators and be receptive to new methods and shared experiences. ‘’The fight against corruption is not for EFCC or Nigerians alone, but for all humanity and lovers of good governance because we may all be affected directly or indirectly. Fighting corruption is a very difficult task, consider it an honor therefore, to be among the few selected men and women of courage and integrity chosen for this onerous task of salvaging the nation’’, he said.

The proramme is geared towards equipping investigators with the fundamental principles in fighting corruption, special aspects in conducting investigation, preventing corruption and supporting investigative measures. Other agencies participating in the capacity building programme are the Department of State Services, DSS; Code of Conduct Bureau, CCB and Independent Corrupt Practices and Related Offences Commission, ICPC. Group Photograph after the Opening Ceremony of the training organized by the German Police for EFCC, CCB and ICPC