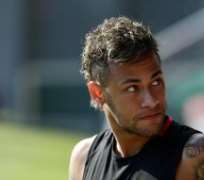 NEYMAR has reportedly agreed to quit Barcelona and join Paris Saint-Germain in a world-record £190million move.

Interactive Sport claims the Brazilian has accepted an offer from the French giants and will finalise his move in the coming weeks.

Neymar has been a long-term target for PSG and came close to joining them last summer.

However, it now appears Unai Emery has finally got his man after missing out on the Ligue 1 title to Monaco .

Neymar was in terrific form last season for Barcelona , helping himself to 13 goals and 15 assists in La Liga.

And PSG are sure to be confident that the capture of his signature will catapult the club into the stratosphere as they look to win the holy grail of European football – the Champions League.

Emery's side suffered huge embarrassment in the last campaign when Neymar's Barca produced a record comeback in the last 16 of the elite competition.

PSG won the first leg at home 4-0 with an incredibly dominant performance.

The Brazilian will quit Barcelona in a world-record £190m move

But the Spaniards upset the odds with a stunning 6-1 win in the reverse fixture, scoring the winning goal with the final kick of the game.

Should the move be confirmed, Neymar is likely to start on the left of an attacking three featuring fellow South Americans Edinson Cavani and Angel Di Maria .

January arrival Julian Draxler looks set to take up the No.10 role on a permanent basis, and the signing may also convince Marco Verratti to halt his efforts in forcing through a move to the Nou Camp.

Neymar's arrival could stop Marco Verratti pushing for a move in the opposite direction.