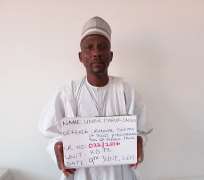 The Economic and Financial Crimes Commission, EFCC today July 13, 2017 arraigned Sahel Technical Services Limited and one Umar Faruk, before Justice M. T. Aliyu of the Kaduna State High Court, Kaduna on a 2-count charge of criminal breach of trust and diversion of public funds to the tune of N120, 700, 000, 00.

Umar who is director of Sahel Technical Services Ltd, had in March 2014 secured a contract from the Kaduna State Ministry of Local Government to supply 115 units of Hand Tillers to all the 23 Local Government Areas of the state.

He was paid the sum of N 120,700, 000.00 (one hundred twenty million, seven hundred thousand Naira) in three installments for commencement of the contract which was to be delivered within twelve weeks.

Umar didn't meet up with the stipulated time frame for the supplies and sought for further extension which was obliged him but till date, the equipment are yet delivered and the money involved has not been refunded.

Count two of the charge reads "that you Sahel Technical Services Limited, a limited liability company; Umar Faruk a director in Sahel Technical Services Limited and another now at large sometime in 2014 in Kaduna within the judicial division of the Kaduna High Court being entrusted with property to wit: the sum of N120,700,000 ( one hundred and twenty million seven hundred thousand naira) by the Kaduna State Ministry of Local Government as part payment for the purchase of 115 pieces of Hand Tillers did dishonestly convert to your own use in violation of Legal Contract which you made in regard to the said sum and you thereby committed an offence contrary to section 311 of the Penal Code Law of Kaduna State and Punishable under Section 312 of the same law"

Both accused persons pleaded not guilty to the charges.

EFCC counsel Joshua Saidi thereafter applied for a date for commencement of trial while praying the Court to remand the accused in prison custody.

The surety must also have the Certificate of Occupancy of the residence verified by the Kaduna State Ministry of Lands, while also providing evidence of payment of tax for the last 10 years.

The case was adjourned to November 16, 2017 for commencement of trial.