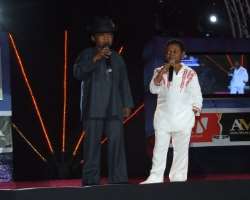 Concerned parents in Nigeria have called on the Actors Guild of Nigeria, AGN, Association of Movie Producers, AMP and other stakeholders in the film industry to call popular pint-sized actors, Chinedu 'Aki' Ikedieze and Osita 'Pawpaw' Iheme to order.

The actors, who joined the movie industry almost at the same time, are giving parents concern over the roles they play in movies.

Their argument is that the actors should play a consistent role in movies; they either take the role of kids or that of adults.

The parents said that since they [Akin & Pawpaw] started as kids in their first movie, a lot of kids at home see them as peers and as a result imitate most of the things they do in movies.

But now that the actors take romantic roles and other adult roles that children shouldn't emulate, the parents want the authorities concerned to call them to order before the situation gets out of hand.

“This attitude of theirs is becoming a threat to us because children don't want to believe that they are adults. The advertisement they also did with sweet meant for children has also made the children believe absolutely that the two actors are children like them and they are ready to do anything they see them do.

“ This has become a great concern that it is becoming a topic of discussion among parents, especially in the buses and market places,” one of the parents said.

According to Mrs. Okafor, she was stunned when one of her sons, after watching one of Aki & Pawpaw's films, told her that “mummy I want to kiss you the way Aki and Pawpaw kissed that girl in that film.”

Another parent, Mrs. Kunle also said that her sons now do everything to imitate Aki & Pawpaw; her sons now dance like them, imitate the way they talk and walk.

She, however, said she now keeps a close watch on her children to ensure that they don't watch movies in which the actors play romantic roles.

Children are what they view and have the tendency of practising whatever they watch on television.

Though another parent said that the actors are talented to play the roles of kids well, she maintained that for the fact that they came to the industry with the impression that they are children, they should maintain that role in order not to have negative influence on children.

Sometime last year, the Actors' Guild of Nigeria Board of Trustees headed by Prince Ifeanyi Dike made a move to ban the actors from taking adult roles, but they were later pardoned when their fans from home and abroad pleaded with the board.