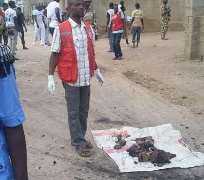 Babakura Abba Ali, leader of the Civilian JTF in the Village told reporters that the Suicide bombers entered the village about 9:30 pm Tuesday night before moving to different locations and detonated the IEDs strapped to their bodies killing themselves, 12 Civilian JTF and seven villagers while 23 other persons were left with injuries.

" One of the Suicide bombers came very close to the sandbag where my men were u pretending to be looking for where she can buy indomie noodles but before my colleages could make any move she detonated the IED strapped to her body killing herself and six members of the Civilian JTF.

He appealed to the Nigerian Army to deploy more men to the area considering the frequent Suicide attacks on molai village which have claimed many lives. He also appealed to Borno state government to equip the Civilian JTF in the area and provide them with electricity to enable them know when an enemy is approaching.

Speaking to newsmen at the scene of the incidence, the Borno state commissioner of police , Mr Damian Chukwu said the attackers targeted mourners at the funeral ceremony in the Village to Carry out the attacks.

" Yesterday , there was a funeral here and you know where there is funeral People usually gather. So four female suicide bombers found their way into the village where one of them targeted Civilian JTF sandbag very close to Militry guard location and before they knew it , she detonated the IED strapped to her body killing six Civilian JTF members and herself.

" The other Suicide bombers detonated their IEDs at different locations in the Village Killing themselves and quite number of people including more members of the Civilian JTF. In all 12 Civilian JTF members lost their lives with seven villagers and the four female suicide bombers, bringing the total number of deaths to 23. The 23 injured persons were taken to various hospitals in Maiduguri while the dead have been evacuated, " CP Chukwu said.

He urged members of the public to do something for themselves and assist the Security agents in Identifying strangers​ or any strange movement in the area to Security agents for prompt actions.