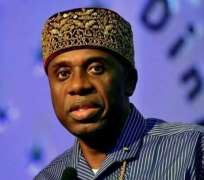 The construction work of the $1.5bn Lagos-Ibadan standard gauge rail is being stalled by Right of Way (ROW) and a flyover bridge at Ijoko, Ogun state. This was revealed on Monday by the Hon. Minister of Transportation, Rt. Hon. Rotimi Amaechi when he told newsmen that the height of the bridge would have to be raised higher for future electrification of the Lagos-Ibadan standard gauge ROW.

Amaechi, who met with Governor Ibikunle Amosun of Ogun State at Ijoko, the site of the flyover bridge, briefed newsmen that as soon as the issues of the flyover height and others associated with the ROW are addressed, actual construction work would commence on the standard gauge project.

According to the Minister of Transportation, “As a ministry, we agree with the contractors for on-site meeting to ascertain the level of work, the project and what way forward. Today we came to the conclusion that they have not commenced serious work and the reason why they have not commenced serious work is the problems they are having on the Right Of Way.

“So what I did today is to address those problems. One of the problems is the height of the flyover which Ogun State is building.

“We need to increase the current height from 4.8 to 6.5 metres because we may also want to ensure that there is electricity on the Right Of Way because tomorrow we may use electricity to power the engine.

“The engineers are going to meet from today and we will also meet by Wednesday. So before Friday, I should be able to meet with you to say this is the best option that we’re going to take

“We said by December 2018, we want to see locomotives running from Lagos to Ibadan. And that is a Presidential directive which must be fulfilled.”

Also speaking on the issue stalling the Lagos-Ibadan Standard rail project, the Ogun State Governor, Ibikunle Amosun stated that, “Let me thank and commend this administration on behalf of the government and 7.5 million people of this state. This is not the only administration that has been in Nigeria. Nigeria has been on for several years but this is the first time a sitting government is going to walk their talk.

“Look at this bridge that we came to resolve some issues about it, we wrote four letters to say we wanted to build this bridge, we didn’t hear anything, nothing was done. Now we are happy that they are doing this rail.

“The gap that we left for this bridge is not enough, that’s why they advised that we should stop this bridge now. Thank God we have resolved this, there are several options, several engineering solutions, that’s why we have to commend the Ministry and the Minister of Transportation. He is here himself with all the Consultants and the Contractors doing the rail. It is going to be in our interest if this rail is fixed, not Ogun state interest but Nigerian interest. All the economies of Nigeria depend to a considerable extent on this axis, moving from Lagos, to Ibadan, to the North, even the one going to the East.

“My only admonition and plea is that they should quickly fix this rail so that we would stop troubling our road. Look at the way they are putting pressure on the roads, it is only in Nigeria that we are moving almost 100 per cent of our goods on the roads. Elsewhere maybe maximum 20-25 on the road, others are by rail. So we commend them, look at what they did from Abuja to Kaduna, wonderful! So we want them to do similar thing from Lagos all the way to Kano and again they are taking from Lagos all the way to Calabar. So kudos to them.

“On our part as a State, we will do our bit. We are going to compliment their efforts and that’s why we are doing this bridge which should have been done by the Federal Government. Those grey areas, engineering details, we are going to fine tune them.”