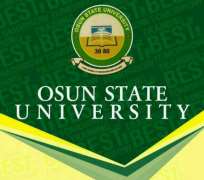 The headless decomposing body of a 400 level student of Osun State University (UNIOSUN), Oluwafemi Soonibare was found in the early hours of Tuesday beside one Jafariyat mosque at Oke-Baale in Osogbo, the State capital.

It would be recalled that Soonibare who was a student of Microbiology in the institution, was declared missing on the 26th of June, 2017 when he left his room shortly after cooking rice without telling anybody.

According to sources, the Alfa who called Soonibare last was arrested by the State Police Command three days ago and after much torture, he eventually brought the police officers to the place he dumped the body of the student today.

When the police got to the area, the head of the student and other body parts were missing and the body had already started decomposing.

The presence of the Police officers attracted people in the area, particularly students who went berserk shortly after.

After some time, the students went on rampage and set the house of the Alfa, the Jafariyat mosque and some other houses in the street on fire.