By Okun Residents in Lagos 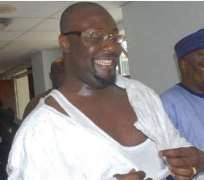 The group in a statement signed by Rotimi Ajibulu and Adebukola Ebenezer said Okun residents in Lagos are very happy with the process, insisting that Senator Melaye had been a bad ambassador of the Okun people.

Ajibulu is a former executive member of the Federation of Okun Students, while Adebukola is the President of Okun Progressive Association in Lagos state.

The duo said they had rallied Okun Residents in Lagos to campaign and work for Dino emergence as a Senator in 2015 but were left disappointed in the manner Dino had portrayed Okunhe Nation and its humble people.

“Prequel to the election, Senator Dino met with various groups and associations from Okun Nation and other towns within the Kogi West senatorial district in Lagos seeking for our support. We in turn formed a think-tank team that spoke to our people at home to support Dino.

"However, today we acknowledge that it was our greatest mistake. In fact, supporting Dino was a tragedy. He has proven us wrong, he has brought lot of disgrace and shame to the Okun People. We totally support his recall from The Senate and urge all our people back home to fools suit." the groups said.

The groups also warned the embattled Senator to stop dragging names of respected Okun indigenes and elders into his woes and wait for the verification of signature by INEC.

"His effort to galvanize support from the Okun people that he abandoned after giving him massive support during the election has hit a brick wall," the group added.

The group while commending the turn out of Okun people to sign the recall petition, urged them not to succumb to harassment and intimidation to back out from the lofty and legendary process it had began.

“We understand the pressure on Okun people to back out of this recall process. We must not bow to malrepresentation, dishonesty and thuggery.

"The Okun nation has a long list of notable and responsible people it can put forward to represent them. Senator Dino is just a mistake of selection."