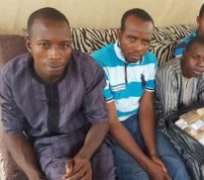 NO fewer than 15 mobile policemen escaped death by whiskers as Fulani herdsmen opened fire on them in Akure, the Ondo state capital. Suspected kidnappers of Chief

Vanguard gathered that the herdsmen numbering about ten stormed the farm of the former Secretary to the Government of the Federation SGF, Chief Olu Falae located at Kajola, in Igbatoro area of the state and destroyed it. Chief Falae invited the police only for the herdsmen to attack the policemen deployed to the farm by the state police commissioner Hilda Harrison.

The continued invasion of the farm of the Elder statesman and its destruction by the herdsmen recently led to his kidnapped and also the killing of one of his security men. Some of Chief Falae's kidnappers who were later arrested by detectives are presently facing trial in court. Sources told Vanguard that the herdsmen last weekend again stormed the Afenifere Chieftains farm and destroyed it.

Speaking with Vanguard, Chief falae confirmed the invasion of his farm by the herdsmen. ” I invited the police to my farm because the herdsmen have been coming to the farm everyday for several weeks and they are longer hiding. They come into the farm around 5am till 9am, destroy the farm, so I went to the police for protection and some Policemen were sent to the farm yesterday.

“They got to the farm and met three separate herds feeding fat on my farm, when the police approached them, they fired at the police. “The policemen went there to see if they can effect arrest for trespassing and destroying farm produce. So if the herdsmen fired the police what would they do to me? The Police image Maker Femi Joseph confirmed the invasion of the farm of the former Finance Minister.

Joseph claimed ignorance of any exchange of gunshot by the police and the herdsmen but said that they were pursued from the farm. While saying there was no arrest, the police spokesperson pointed out that the command had launched an investigation into the latest attack of the farm of chief Falae.