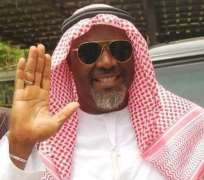 The Youths made this declaration during the enlarge Youth Assembly Meeting held in Kabba at Ajoke Hotel Hall on Sunday. Representatives of the various categories of Youths who spoke during the event in unison, acknowledged the superlative performance of Senator Dino Melaye, within the past 24months since the mandate was entrusted to him, noting that he is truly the right man for the job of good representation.

"Senator Dino has not disappointed us hence the need to offer him more unflinching support to enable him do more for the constituency".….said one of the Representatives.

In addition, the Youths who in one mind recognized Senator Dino as the only senator and leader fighting for the interest of the workers in Kogi State. Further acknowledged the fact that he indeed mean well for the State therefore, the members of the forum have in one accord appreciate the him for the giant strides recorded so far in his bid to to challenge the government on why the salaries were not paid despite all the money allocated to the state from the Federal government thus pledging to offer more support for him.

However, since action speaks louder than words, it was on this premise, that the Youths in their good numbers from all the seven Local Governments in the senatorial district, came together under the umbrella of Kogi west Senatorial District Youth Assembly to affirm their position publicly that they appreciate, support and will continue to partner with Senator Dino Melaye beyond 2019

Nevertheless, the meeting had as it theme; “Defining our Tomorrow Today” with Barr. Jemirin Adebola as the Chairman of the Session. Finally, the Communique was read by Dr. Kalejaiye Ojo and it stated thus;

*That the great people of the senatorial district should eschew engaging in propaganda, mudslinging, Blackmail, Vituperations and other vices.