Fayose hails Saraki’s CCT triumph, Says; “I predicted it and it came to pass” 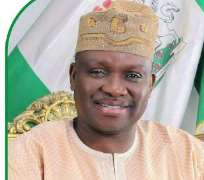 Ekiti State Governor, Mr Ayodele Fayose has hailed the triumph of the

as another victory of Nigerians over tyranny, saying; “I am happy that

predictions and it has come to pass.”
Governor Fayose who drew the attention of Nigerians to number eight of

his 22 predictions for year 2017, said; “I said it categorically that

the Code of Conduct Tribunal will absolve Senate President Bukola

Saraki and today, the prediction came to pass.”

Reacting to the CCT judgment discharging Senator Saraki through his

Olayinka, the governor said the judgment was another lesson for the

government that criminal cases are not won on the pages of newspapers.

He congratulated the Senate President, urging him to see the victory

rights of Nigerians.
The governor said; “I have maintained that the government of President

Buhari is not fighting any corruption. Rather, what is being done is

hiding under anti-corruption fight to persecute, humiliate, harass and

they have been losing corruption cases.
“Look at all the noise they made when they started Senator Saraki’s

case, it was as if he will be sent to jail the following week. But

when it was time for them to prove their allegations, they could not.

“Even the case of the former National Security Adviser (NSA), Col.

that destructive weapons capable of disrupting the peace of any city

in Nigeria were found in his possession, why are they the ones seeking

trial?
“Up till today, they have not brought any evidence against Dasuki.

They have not even been able to commence his trial. Instead, they have

continually disobeyed court orders that he should be released from