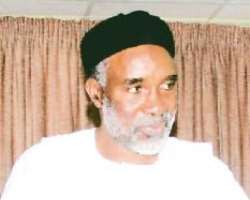 Provost of College for Legal Studies, Yola, Barrister Musa Yahaya, has been petitioned by the principal staff of the institution to Economic and Financial Crime commission over alleged corruption, financial misappropriations and maltreatment of staff by members of the Non Academic Staff Union of Educational and Associated Institutions (NASU) Adamawa State chapter.

The petition sent to the Economic and Financial Crime Commission (EFCC) said the provost used his position in engaging in fraudulent activities and he was also said to masterminded the termination of appointments of some labour leaders in the college, the allegations denied by the embattled provost saying that the petition was aimed at tarnishing his image by some group of persons within and outside the college.

However investigation revealed that the situation started worsening recently when the provost in a letter dated February 2010 with reference number NO.CLS/Y/S/ADM/OFF/1/38 directed the College Assistant Registrar Mallam Muhammad Mukhtar Adamu who is also state chairman of the joint action committee of the Academic and non academic staff unions in Adamawa state owned tertiary institutions to present statement of NASU Account. However non compliance to this directive resulted to termination of appointments of the college NASU chairman and his secretary respectively.

This action by the provost prompted reactions from various labour unions, while members of the Non Academic Staff Union of Educational and Associated Institutions (NASU) in the state issued a 21 day ultimatum for the state governor to intervene as they threatened to close down the four state owned tertiary institutions.

Other allegations leveled against the provost include misapplications of funds and non compliance to due process which resulted to alleged wrongful termination of appointments.

Investigations revealed that non academic staff union in the state had once wrote to the provost prevailing on him to stay action on what he might have intended to do to their branch chairman and other NASU members in the college as it could be recalled that in a letter dated 24th/4/2010 titled:'' Re:Invitation to appear before appointment and promotions committee of the college council'' the state labour leaders said that it is not within the constitutional provisions for the management to demand for statement of account of the union as the provost and management are not financial members of the union.

Addressing newsmen on the controversial termination of appointment of the union leaders by the provost, NASU state chairman Comrade Mahmud Muhammad and his secretary respectively Ishaku Bitrus respectively said due process were not duly followed.

The duo averred that,'' It is not within constitutional right of the college to demand for the statement of account of the union. This has never happened or practiced in any establishment, while should the management will interfere in the affairs of the union. On what moral justification could their appointments be terminated?''


According to them, ''Ordinarily, the college is expected to have a disciplinary committee. It is therefore surprising that the Provost would constitute himself into the accuser, the judge and the jury against the affected staff.''

The labour leaders said already the matter has since been communicated to the national body as well as the labour ministry.

When contacted on the matter, the embattled provost Barr. Musa Yahaya Nuhu denied all the allegations been leveled against him, '' this is blatant lie aimed at tarnishing my image.''

He confirmed to our reporter that the assistant registrar was sacked for his non compliance to submit the statement of account of the union to the management.

''He refused to release the NASU statement of account for the months of January 2009 to April 2010 as earlier demanded by the college authorities, he also invited Abdulrasheed Muhammad Bibi a former employee of the college to the JAC meeting at Ganye, knowing fully well that his appointment was terminated by the college council,'' the provost has said.

On the petition sent to EFCC he claims that, ''I'm not rattled at all, because all are mere mischief's , they are bent seeing that I'm removed from the office, that's all they want.''

He noted with great concern that staff and students of the college are yet to start appreciating his efforts in restoring the lost glory of the college established more than 20 years ago, '' They are not appreciative of all the giant efforts been done to bring sanity by applying civil service rules as enshrined.''

He said no amount of pressure will make him rescind his decision, ''who ever feels aggrieved let him or her seek redress at the court of law.''

It could be recalled that some months back religious crisis was averted in the college when the provost ignobly suspended expelled some students in the college recently during protest by some religious groups sparks-off.

The Provost had suspended three students for one semester each for openly expressing their excitement by hugging one another as soon as they stepped out of the school examination hall.

The Provost who claimed to have spotted them from his office invited them and unilaterally slammed the punishment on them, without following due process, despite pleas by the students.

He also summarily expelled nine other students who protested the suspension before the State House of Assembly.

further finding proved that some key personalities in the state including the Speaker of the Assembly, James Barka, Deputy Governor James Bala Ngilari, and the Secretary to the State Government intervened in the matter, and advised the College Provost to reconsider his decision but that was the beginning of further trouble for the students: the Provost withheld their results. Already the affected students have since run to court to seek redress