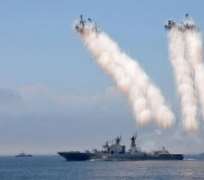 Russia has claimed it has carried out successful tests of a hypersonic missile, a year ahead of schedule.

According to government-controlled news agencySputnik, the missile system – known as Zircon – could be installed on PyotrVeliky, the country's nuclear-powered missile strike ship.

They can travel faster than any other missile on the planet, up to 4,600mph, which is almost 66 times the speed of sound and enough to practically guarantee they cannot be targeted or intercepted.

Mr Ripley explained that this effectively rendered Western defences, such as the anti-missile systems aboard new Royal Navy carriers the HMS Prince of Wales and the HMS Queen Elizabeth, “obsolete”.

“It will greatly reduce the reaction time that they (Western military) have to deploy their own defences and counter-measures,” he said.

While the world’s media were aware that Russia was developing the missiles, these tests come much earlier than the original projected date of 2018.

Military analyst Vladimir Tuchkov told Sputnik: “It (the Zircon missile system) is expected to be added into Russia's arsenal between 2018 and 2020.”

These reports emerge as relations between the West and Russia reach their worst since the Cold War, fuelled by the crisis in Ukraine, the devastating conflict in Syria and the alleged Russian meddling in Western politics – most notably, the US elections.