Aregbesola @ 60:Associates say all Expenses not from Osun resources 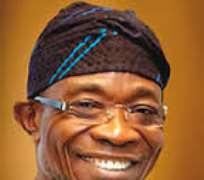 Some of the friends and political associates of Governor Rauf Aregbesola of Osun state on Thursday, said there was no plan to use the state resources for the 60th birthday anniversary of the State Governor.

They disclosed that the forthcoming 60th birthday anniversary of the Governor would be financed from fund raised by the committee of friends of Mr Governor and his political associates.

The friends of Governor Aregbesola stated this while addressing journalists at the Press Conference marking the kick off of activities of the 60th birthday of Ogbeni Rauf Aregbesola at NUJ Press center, Osogbo.

The conference, which was addressed by the former Assistant Chief of State and Commissioner-designate, Barrister Gbenga Akano, said the conference was to clear the air on the sources of funds to commemorate the 60th birthday anniversary.

Akano who announced the account number of the fund raising for the birthday celebration, said the friends and political associates of Mr Governor had opened an account at First City Monument Bank (FCMB) with account number 4495130013 for whoever wishes to donate for the programme.

He debunked the rumours that Governor Aregbesola has been taking the state's resources to Lagos state, saying on no account does the Governor intends to do so.

He said, "Monies for this elaborate programme are coming from very many friends of Mr Governor across the country and they are the ones sponsoring it.

"The cost size is reasonable over which the government has no control because the friends have resolved to give a befitting birthday bash to Ogbeni.

"The rationale behind this press conference is to solicit your support to communicate and propagate the positive results of these programmes both on the economy of the state as no single Kobo will be spent outside the state.

"This press conference was also aimed to provide answers to movement of bodies and materials aimed at celebrating the Governor as he clocks 60 in a couple of days.

"Like in most situations, birthday period is a time stocks and do self examination not only by a leader like Ogbeni but in the minds of addicted followers.

"This, we make bold to say that people who are seated here with us and those who are not here present that we are addicted to Rauf.

"I wish to inform you that the followership, political fellowship and admiration which Ogbeni enjoys across Nigeria is robust and huge.

"It is our pride and elation to inform you that these admirers have therefore chosen to ambush Ogbeni by celebrating him on the occasion of his 60th birthday which comes up next week Thursday in Osogbo."

Analysing the programmes lined up for the celebration, Akano said "it started on Thursday at 7:00am when about 100 Scatters crisscrossed Osogbo City taking off at the City Stadium and terminated at the Nelson Mandela Freedom Park.

"Today (Friday) at 7am, a socio-political group, De Rauf have mobilised over 100 faithduls and dedicated Arabi Schools students to pray for long life and prosperity for Ogbeni with recitation of the glorious Quran alondside eminent scholars while a special Jumat service holds at the Osogbo Central mosque.

"Ever since his assumption of office, Ogbeni Rauf Aregbesola has taken seriously, sports development, especially as it affects physical exercises to attain the health status required for good living.

"No wonder he is about the only State Chief Executive who has unparalleled record of distance walking as outdoor policy programme.

"So, on Saturday at 7am, party faithful, town people, friends from across Nigeria and other lovers of sport shall join in a colourful Solidarity Trek covering about 9killometer within Osogbo terminating also the Nelson Mandela Freedom Park where aerobics and other light physical exercises will take place; usual of the Walk to Live programme.

"Come Sunday will there be a Novelty soccer competition between the State of Osun house of Assembly and the newly confirmed members of the State Executive Council holding at the Osogbo City Stadium at 10 O'clock with an Inter-denominational Open Air Service holding at the Nelson Mandela Freedom Park at 4 O'clock.

"There shall be a visit to orphanages around the State on Monday with Mr Governor's birthday wishes to the kids and their managements and have the needful done.

"While on Tuesday, Ogbeni will be before the state law makers. This is at the invitational of the parliamentarian who want to honour him in a legislative way. This shall be followed by a luncheon at the Grand Atlantis Event Centre, Osogbo. All of these are at the instance of the law makers.

"Lovers and supporters of Ogbeni shall participate in cleaning exercise across the state. In Osogbo, a sanitation activities will take place from Olaiya junction towards Okefia and along Iwo road to achieve further deepen the government's O'Clean policy.

"The grand finale of the entire birthday programme holds on Thursday, the 25th May when the Oranmiyan himsrlf will turn sixty on mother earth.

"The immediate family of mr Governor will stage his birthday prayers at the Governor's lodge aby 7am and by 11am the second edition of Raufnomics will hold at the distinguished Event centre Osogbo.

"The Colloquium titled Raufnomics in the transformation of Osun is the second in the series.

"The acting President, Prof. Yemi Osinbajo is our Special Guest of Honour while the APC National Leader, Asiwaju Bola Ahmed Tinubu and the pioneer Chairman of the APC Chief Adebisi Akande will lead very eminent personalities to the colloquium." he added.