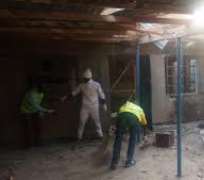 According to The Cable, around 1am on Saturday, “a male and female suicide bomber struck at the mechanical works department of the university. One security guard was killed and a soldier injured."

That is about the only mention of the security guard who lays blown up and the injured brave soldier you shall be hearing.

It was this same date, May 14th last year that we honored two police officers who intercepted a cowardly suicide bomber forcing him to detonate his bomb at the gate of the Borno state Government secretariat in Maiduguri. Their names were never mentioned, the nation was never able to give personalized thanks.

The brave security officer and soldier who saved our children and teachers at University of Maiduguri won't be called heroes. Their names would not even be mentioned. I doubt the state or federal government will write the late guard's name down in a permanent official record and reach out to his family to thank them; talkless assure them of some form of support for their upkeep.

The security man is our unsung hero. Many like him have passed and many more perhaps will. Making the ultimate sacrifice to save our families, our children, our institutions. They are not governors who get mention in the news in spite of opening our schools and risking our kids when the education boards warned them not to.

They are not presidents who get celebrated for negotiating with terrorists, fixing a price to pay them from the nation's coffers, and freeing terror masterminds. No, these are not the owners of Nigeria PLC, whose names we are made to remember in spite of their chokehold on our lives. These are mere men. Men who die to capture bad guys we pay to release.

Michelle Obama will carry no placard for these and nor will Melania Trump. The world's headlines are not made of these. But once again, I will celebrate them. ENDS will celebrate them. Our headlines here, wherever this article is published will sing their praise. And though we do not know their names, we praise and pray for them and tell their families; their ultimate sacrifice will never be forgotten.