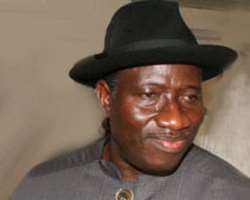 As a prelude to this, the Federal Executive Council is expected to review many aspects of the agenda at its meeting on Wednesday (today).

A report by the Minister of National Planning, Dr. Shamshudeen Usman, on the 'implementation of the Seven-Point Agenda from 2007 to 2009' had recommended a review of the document.

The report is one of the eight memos to be discussed at the FEC meeting which will be chaired by Jonathan.

The memos have already been forwarded to ministers by the Secretary to the Government of the Federation, Alhaji Yayale Ahmed.

On power and energy, the late Yar'Adua promised infrastructural reforms through the development of sufficient and adequate power supply which would enable Nigeria develop into a modern economy by 2015.

The reform on wealth creation focused on creating wealth through diversified production, especially in the agricultural and solid mineral sector and moving away from reliance on the oil sector.

On the transportation sector, the administration of the late President intended to modernise the railway system and also improve substantially on the transport network.

Also, the late Yar'Ardua said he would change land laws to enable the release of land for commercial farming and other large scale businesses by the private sector.

On security, he said it would be seen as not only a constitutional requirement but also a necessary infrastructure for the development of a modern economy.

The late President also promised a two-fold reform in the educational sector to ensure the minimum acceptable international standards of education for all.

But the haphazard implementation of the agenda while Yar'Adua was alive had provoked public debates and suggestion for its reduction to at most two or three.

Top on Nigerians demand were increase in electricity generation, electoral reform and provision of other critical infrastructure.

For instance, the 2008 Country review report of the African Peer Review Mechanism had described the agenda as lacking in clarity and 'questionable in its realism.'

While ex-raying Nigeria's socio-economic developments, the report criticised the agenda as lacking specification for structural transformation.

The blue print 'does not meet the requirements for a clearly defined vision,' the APRM said.

Also, the Central Bank Governor, Mr. Lamido Sanusi, had advised that the agenda be reduced to two.

'My view is that until we address the infrastructural problem in this country, we will not even begin to solve our problems,' Sanusi said while being screened as the apex bank governor.

'My view is that in the seven-point agenda, if we could just focus on two or three things and finish them up in the next four years, we will be far more effective in contributing to this country than focusing on seven.

'We produce gas and export it, we do not have power plant. We produce crude oil, we import refined petroleum products. If we can set up power plant, set up our refineries, their multiplier effects on the economy and on growth is amazing, and if we don't do that we cannot grow.'

The FEC will at the meeting today also discuss contract proposals for the dualisation of the Port Harcourt/Aba Expressway; and ratification of the termination and re- award of the contract for land reclamation and shoreline protection project at Kurutie community, Gbaramatu Clan, in Warri South Local Government Area of Delta State.

The contract for the provision of engineering infrastructure in Katampe District of the Federal Capital City through public private partnership will also be considered.

Approval will also be given for the National Policy on Information and Communication Technologies in the education sector.

Jonathan had taken increased electricity generation as his number one priority, a matter that forced him to keep the power portfolio or ministry under his control.

He also set up a presidential committee on power headed by a former minister of Science and Technology, Prof. Bath Nnaji, to assist him in changing the status quo.

The council is also billed to consider a memo for the approval of contracts for the purchase of vehicles for the Revenue Mobilisation, Allocation and Fiscal Commission.

It will likewise consider the Report of the First Nigeria-USA Business Forum on Available Opportunities and Challenges of Doing Business in Nigeria, which held in Atlanta, Houston and Chicago in the United States from April 12 to 20, 2010.

The report of the African Regional Ministerial Conference on Civil Aviation Security, held in Abuja from April 11 to 13, 2010, will also be presented at the meeting.