I'd never give up fight for actualisation of Biafra Republic: Nnamdi Kanu 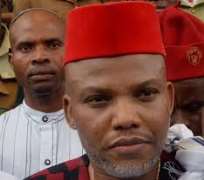 The Leader of the Indigenous People of Biafra, IPOP, Nnamdi Kanu, Monday vowed to challenge his stringent bail conditions, saying they were unconstitutional.

He also said that he would never give up his agitation for the restoration of Biafran Republic, pointing out that he wanted the reward for his agitation in this world and not when dies and goes to heaven.

Kanu spoke in Enugu when paid a “Thank You” visit to the leadership of the Eastern Consultative Assembly, ECA. The ECA appointed Kanu its leader in absentia when he was being detained at Kuje Prisons with Chief (Mrs) Maria Okwo as his deputy among others. The IPOB leader was received by top members of the ECA, including Mrs. Okwor and Evang. Elliot Ugochukwu-Ukoh, among others.