U2 CANCEL GLASTONBURY AND US TOUR AFTER BONO’S INJURY 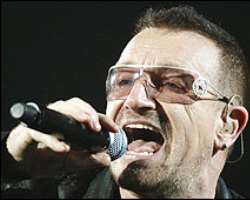 U2 have pulled out of the Glastonbury Festival and postponed their US tour after Bono had emergency surgery to save him from possible paralysis.

Neurosurgeon Joerg Tonn said: “The surgery was the only course of treatment for full recovery and to avoid further paralysis.”

They were due to headline Glastonbury on 25 June, in the middle of their 16-date North American tour, which was booked for June and July.

Continue reading the main story
While the surgery has gone very well, the coming weeks are crucial for a return to full health

Dr Muller Wohlfahrt
Prof Tonn told the Reuters news agency Bono had been “in severe pain with partial paralysis of the lower leg”.

The frontman is “now much better with complete recovery of his motor-deficit”, he continued.

“On review of his MRI scan, I realised there was a serious tear in the ligament and a herniated disc, and that conservative treatment would not suffice.

“We are treating Bono as we would treat any of our athletes and, while the surgery has gone very well, the coming weeks are crucial for a return to full health.”

His rehabilitation will begin in the next few days, with the intensity increasing over the next eight weeks.

“For a performer who lives to be on stage, this is more than a blow,” he said.

“His concerns about more than a million ticket buyers whose plans have been turned upside down, we all share, but the most important thing right now is that Bono makes a full recovery.”

Glastonbury had been attempting to book U2 for many years and their appearance was expected to be a highlight of the event's 40th anniversary.

The band said they had written a new song for the occasion.

“I'm heartbroken,” he said. “We really wanted to be there to do something really special.”

'Best wishes'
He declined to comment on a possible replacement. “Instead, we would simply like to send Bono our very best wishes for a full and speedy recovery,” Mr Eavis added.

Dizzee Rascal, who is below U2 on the Pyramid Stage bill on Friday 25 June, could now take the headline slot. Festival favourites Coldplay have also been mentioned as possible replacements.

In 2005, Kylie Minogue withdrew following her diagnosis with breast cancer. Basement Jaxx were promoted to fill in.

U2's North American dates will be rescheduled.
Their 360 Degree tour earned the band about $109m (£75.3m) in 2009, making it the most profitable tour of the year, according to Billboard magazine.