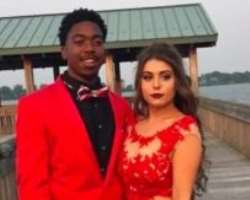 In photos shared on Facebook, Anna and Phillip look picture-perfect on their way to the big dance. Anna wore rad lipstick to match her lacy scarlet mermaid gown, and Phillip layered a matching red suit jacket over a black button-down and slacks.

Anna said that though Phillip is just a friend, he’s also ‘really funny’ and ‘super cute’, so she snatched him up as her prom date.

Unfortunately, Anna’s dad — whom she says has always been vocally racist — saw the snaps online and wasted no time sharing his disappointment with her in an incredibly abusive manner. +6
Awful: Her father, whom she doesn’t live with, saw the pictures and went on a racist rant +6
Despicable: He called her and the boy she went to prom with names, and said his daughter was dead to him

Anna explained to BuzzFeed that she and her dad have had a strained relationship for years. Her parents are divorced, and though she lived with him briefly as a child, she’s been in her mom’s house since her early teens.

His tirade, however, seems to have gone beyond any uncomfortable words they’d shared in the past.

Responding to his initial texts, Anna wrote: ‘I went to prom with a black guy so that’s a problem … racist much.’

‘Yes I am,’ her dad wrote back unabashedly before continuing with the grammatically incorrect pronouncement: ‘Your dead to me.’ He also told her that he was cancelling her cell phone and her car insurance, to which she replied, ‘I didn’t do anything wrong.’

‘You can go to hell. What the f*** is wrong with you? … You want to mingle with Subhumans I’ll treat you accordingly. [sic]’

Anna knew of her father’s opinions, though she still found it ‘incredibly sad’ when he reacted so vitriolically. ‘He has told me that if I ever dated a black guy that I will and would be dead to him,’ she told BuzzFeed. ‘I stood my ground for what I believe in. He has called me several horrible things before.’

She added: ‘This just hurt more because I can not believe how anyone can hate someone they don’t even know because of their skin color…

‘My mother was horrified and felt terrible but there isn’t anything she can do.’

Her date, Phillip, also shared screengrabs of the exchange on Twitter, where they’ve been steadily earning attention and horrified reactions.

‘It’s important for people to see that racism is very much alive,’ she said.