How Aregbesola Will Pick A Successor 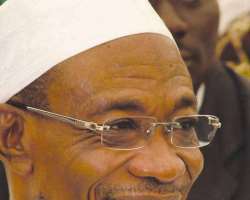 The race for governorship of Osun state is picking up .Within the ruling All Progressive Congress, the man holding the ace is Governor Rauf Aregbesola, whether anybody like it or not.

Rauf is going to instal a successor, going by ongoing and existing permutations. A realistic fact is that the Governor as at now is not sure of who is going to succeed him. Yes,deep in his heart ,he is still searching . Like a friend said ,the oracle is yet to select "omo oye".

And this is why all ongoing projections are false.With the death of Senator Isiaka Adeleke ,the above fact has even become more real than mere speculation. For one ,all pre - death scheming has been effectively silenced by the exit of Asiwaju of Ede. The sad event even further reconfirmed that Ogbeni is yet to decide.Yet,this is #ogbenitilldaybreak.

As an insider ,let me scribble here seven principles that will guide how Ogbeni will choose a successor. Please don't shout on roof top over what you are going to read.It is a bitter fact which all stakeholders should rather note and accept now.

First,any very rich aspirant should forget any dream of making the succession. No leader entrust a seat of such importance to a politician who can finance himself. What will be the place of the outgoing governor and the many leaders? A rich man in office is a recipe for political arrogance which will destroy not just the predecessor but the establishment.

Three,any aspirant very close to the incumbent is a future agent of betrayal . Because he knows all the secrets of the incumbent,he is in a better position to blackmail his predecessor if he emerges the Governor. Several examples abound.

Four,any aspirant who understands the full working of the ruling establsihment is well equipped to thrash and destroy it after securing power. He would actually destroy that establishment because he would have the eternal fear that his predecessor would continue to manipulate the structure to undermine him.

Five,any aspirant of decades long association with the incumbent is likely to carry both credit and liability of the outgoing ,meaning that electorally he cannot bring new cadres of voters to the electoral mathematics. Because he is known as the associate of the outgoing ,the voters circle is restricted ,leaving many new voters outside the political calculus.

Six ,long term association with the incumbent is no longer a condition for retaining loyalty and protection from the succesor. If an Akeredolu can protect a Mimiko ,how would a succesor on the same party not be more than eager to protect the predecessor. In fact ,a pledge of loyalty to the outgoing is now a weak bargaining power as loyalty can be secured from both new and old friends.

Seven,the capital city factor has been nullified by the widely acknowldged transformation of Osogbo with several overhead bridges and infrastructural advantages. Hence that commendable achievement has relieved Ogbeni Aregbesola of that burden of satisfying the yearning of Osogbo for the governorahip.

I put the above together to let you pundits know that the game is still too early. A lot of surprises are still in the oven.

But the APC as a party in Osun owes a lot to the Chief of Staff ,Gboyega Oyetola for his loyalty and passionate support for the Governor in the last six years. Ditto for Dr Ajibola Bashiru , an erudite politician who is contributing greatly to the transformation of Osun state.