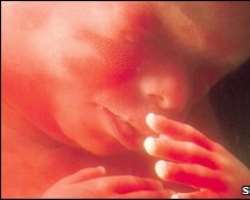 Male foetuses appear more sensitive to stress than female ones

The stress caused by the 9/11 attacks on the World Trade Center may have led to an increase in miscarriages of male foetuses, US researchers say.

A study in BMC Public Health found 12% more male babies were lost in September 2001 after the 20th week of pregnancy than in a “normal” September.

Data says fewer boys were born in all states three to four months after 9/11.

The review by the University of California, Irvine, is said to support the theory of “communal bereavement”.

This is defined as acute mental distress related to a major national event, like 9/11, even if there is no direct connection to those who died or were involved in these events. Across many species, stressful times reportedly reduce the male birth rate

Dr Tim Bruckner, University of California
Pregnant mothers are thought to be particularly prone to this experience, as are unborn baby boys.

In order to analyse male foetal death rates, the researchers gathered data for the years 1996-2002.

In September 2001, however, their research showed an additional 120 male foetal losses, equivalent to a 12% increase.

Dr Tim Bruckner, who led the research at the University of California, Irvine, said that miscarriages were grossly under-reported in the US and that the real figure of male foetal losses was likely to be much higher.

Explaining the findings he said: “Across many species, stressful times reportedly reduce the male birth rate.

“This is commonly thought to reflect some mechanism conserved by natural selection to improve the mother's overall reproductive success.”

However, by studying birth rates nine months after the 11 September attacks, researchers say there was no evidence that the conception of male babies was affected.