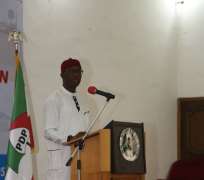 Journalists have been advised to uphold their professional code of ethics at all times.

The State Commissioner for Information, Mr. Patrick Ukah, gave the advice in a press statement to felicitate with Journalists in Delta State on the occasion of the World Press Freedom Day celebrated Wednesday with the theme: “Critical Minds for Critical Times: Media’s Role in Advancing Peaceful, Just and Inclusive Societies”.

Mr. Ukah said when Journalists learn to work according to the ethics of the profession, they would enjoy the protection of the Constitution, which according to him, is strong enough to defend them.

The Commissioner expressed joy that Journalists enjoy freedom in the course of carrying out their jobs in the state, stating that the administration of Governor Ifeanyi Okowa had always maintained a cordial working relationship with the press.

He said that pressmen all over the world, and in particular our own environment, should learn to work according to the ethics of the business, stressing that “if that is done, pressmen will continue to enjoy freedom of the press because the constitution is strong enough to defend pressmen in the country”.

“As a government, we are particularly happy because we have had a very good relationship with the media because we allowed them the freedom to do their job,” the Commissioner stated.

While paying glowing tribute to journalists who died in the course of duty, he encouraged practicing journalists to keep the flag flying by ensuring that they imbibe the ideals the fallen heroes stood for.

Also speaking, the Chief Press Secretary (CPS) to the governor, Mr Charles Ehiedu Aniagwu, while trying to give a holistic look at this year’s theme, gave the following posers: How much progress have you made in the practice of journalism? How responsible have you being in terms of executing the responsibilities vested in the media by the provision of the Section 22 of the Nigerian Constitution which makes it very clear that the media has a responsibility to hold government accountable to the people?

How many persons have also suffered certain situations on account of their attempts to discharge the responsibility vested in them by being members of the pen profession?

He called on journalists to take a look at the posers with a view of re-strategizing to be more socially responsible along the line of developmental journalism or holding government to be accountable to the people.

He alleged that in the last one year there has been some form of attack on the principles of the rule of law by the President Mohammadu Buhari-led Federal Government which calls for critical minds, bringing to bare the positions of the law alongside the responsibility bestowed on the practitioners by different theories that govern the media operation.

Aniagwu hinted that for journalists to be able to hold those in government responsible to the people by exposing their act of irresponsibility, they must come to equity with clean hands even as he cited John 8:7.

“So, if you are a journalist and you want to report or hold the government accountable, the question is, how accountable have you also being? So, you must go to equity with not just clean hands but very clean hands. That is also the responsibility that this theme reminds you of so that you don’t just make the mistake of thinking that this theme is only talking of those in authority or the people you are holding accountable are not just politicians but anybody in the position of authority including journalists as well”.