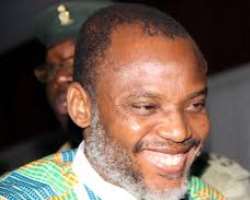 An Igbo socio-cultural association, Nzuko Umunna, has expressed satisfaction that the leader of the Independent People of Biafra, IPOB, has been released after a protracted detention by the federal government.

In a statement signed by the association’s Coordinator, Ngozi Odumuko, and the Secretary, Paschal Mbanefo, the group lamented the stringent conditions attached to the bail conditions of the IPOB leader and expressed happiness that it was eventually met.

It thanked all those who made this possible but was also very quick to add that unless the three others, Chidiebere Onwudiwe, Benjamin Madubugwu and David Nwawuisi, charged along Kanu were released, and all charges against them dropped, justice would still not have been seen to have been done. It therefore urged the federal government to take the necessary steps to respect the rights of Kanu and his colleagues and ensure that the issues fuelling agitations in the South Eastern part of the country are addressed rather than attempt to suppress agitations with brutal force.

Below is the full text of the press release.
With great sense of responsibility, Nzuko Umunna join other well-meaning Nigerians to welcome the smooth perfection of the bail granted the leader of the Indigenous People of Biafra, IPOB, Mazi Nnamdi Kanu, despite the stringent conditions attached to the bail which have also been questioned by many Nigerians and some of which have the semblance of infringement of fundamental human rights of Mazi Kanu.

As we welcome Kanu’s bail, we wish to state clearly that bail should be extended to his colleagues too, Chidiebere Onwudiwe, Benjamin Madubugwu and David Nwawuisi, as has been previously granted by the court.

We also wish to commend the efforts of Kanu’s legal team and all those who have been steadfast and supportive in the call for the unconditional release of Nnamdi Kanu and his colleagues. Nzuko Umunna salutes the timely response of the South East Caucus of the Sneate especially Senator Enyinnaya Abaribe and also the two others who signed the bail bond for the release of Kanu, Tochukwu Uchendu and Jewish Chief High Priest, Immanuel-El Shalom Oka-Ben Madu.

We appreciate the various groups and leaders who showed and have continued to show solidarity to kanu and others in the course of this trial.

Finally, it will be recalled that Nzuko Umunna has earlier called for the unconditional release of Nnamdi Kanu and his colleagues and we are not reneging on that until justice is seen to have been done.

We wish to reiterate our stand that the rights of Kanu and his colleagues must be respected and that the government should as a matter of urgency look into the numerous issues that have given rise to the unprecedented upsurge in agitations in the South East part of the country instead of using brutal force to suppress peaceful protests, an action which would always be counterproductive.

Disclaimer: "The views/contents expressed in this article are the sole responsibility of the author(s) and do not necessarily reflect those of The Nigerian Voice. The Nigerian Voice will not be responsible or liable for any inaccurate or incorrect statements contained in this article."
Articles by Jude Ndukwe
28-7-2017  Rochas Okorocha And The Many Misfortunes Of A Glorious State22-5-2017  Exam Malpractice And Jamb’s Futile Attempt To Tarnish Igbo Image3-5-2017  Nnamdi Kanu Made No Such Statement2-5-2017  Biafra: Pharaoh, Let My People Go!21-4-2017  Release Deji Adeyanju Now Or Face The Consequence, Civil Society Groups Warn PoliceMore...