2015: How US worked with 12 northern govs to plot Jonathan's fall: Ex-Gov, Babangida Aliyu 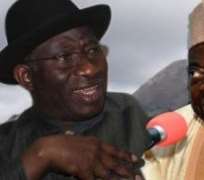 Former Governor of Niger State, Dr. Mu'azu Babangida Aliyu has revealed that US government officials invited, at least, 12 northern governors to the US to ascertain their level of commitment to removing Jonathan and not just on how to curtail the Boko Haram insurgency as suggested.

Goodluck Jonathan and Babangida Aliyu Dr Aliyu said this in the book, “Against the Run of Play: How an Incumbent President was defeated in Nigeria,” written by Thisday Newspaper's Editorial Board Chairman, Segun Adeniyi. “I have no proof of course, but I think the idea was to ascertain what the disposition of the North would be to the idea of another term for President Jonathan,” he is quoted as saying in the book. “That was my reading of the situation. I believe it was all about the 2015 election for which the Americans had resolved not to support Jonathan. They just wanted to size us up for the level of commitment to regime change.”

Aliyu said in one of the sessions, Murtala Nyako, former Adamawa state governor, accused Jonathan of sponsoring Boko Haram with the intent of destroying the North. He added that Nyako's accusation signalled to the Americans that the North was not in support of Jonathan's re-election bid. Nyako was further quoted as saying: “If Jonathan had been clever enough to say he would not run and had stuck with the PDP zoning formula by supporting a young Northern candidate, I am most certain Buhari would have shelved his ambition to contest in 2015, knowing there was no way he would win,” he said. However, at press time, last night, the US Embassy in Nigeria was yet to respond to Vanguard's inquiries on the issue.

How Jonathan aborted plot to kidnap Jega In addition, the book details how former President Goodluck Jonathan sidestepped intrigues woven by supporters to concede the 2015 presidential elections have emerged, including a plot to kidnap then chairman of the Independent National Electoral Commission, INEC, Prof. Attahiru Jega. Among the evidence adduced by supporters to truncate announcement of the results were photographic evidence to corroborate claims that one million votes were allegedly added to his rival's votes in the 2015 election in Kano State. Jonathan in the book wondered how he was betrayed by some of his supporters especially, in the North. One of those so named, Alhaji Adamu Mu'azu, who then was chairman of the Peoples Democratic Party, PDP, has, however, denied the claim, saying yesterday that he supported Jonathan in the face of abuse, insult and open ridicule by friends and brothers.

The book observes that in the midst of confusion that trailed the election results, Jonathan and his supporters were in panic mode with many suggesting that he should call Buhari to concede defeat while others opposed any concession. Ministers knelt, begged Jonathan to concede It pointed out that it was in the midst of the confusion that two ministers in Jonathan's cabinet and Special Assistant on Domestic Affairs went on their knees to beg him to concede so as to steer Nigeria off the path of chaos. “Kneeling in front of Jonathan were his Attorney-General and Justice Minister, Mr. Mohammed Bello Adoke, SAN; Aviation Minister, Mr. Osita Chidoka and Special Assistant to the President on Domestic Affairs, Mr. Waripamo-Owei Dudafa.

“The mission of the three officials was to persuade Jonathan to call and congratulate his opponent, Major-General Muhammadu Buhari (retd) of the All Progressives Congress (APC), even as the final results were still being collated by the Independent National Electoral Commission (INEC). “Seated a few metres away in the room were Vice-President Namadi Sambo; Akwa Ibom Governor, Mr. Godswill Akpabio; Executive Secretary of the Nigerian Christian Pilgrims Commission, Mr. John Kennedy Opara and the Co-ordinating Minister for the Economy, Dr. Ngozi Okonjo-Iweala.

“Chidoka had co-opted Adoke and Dudafa to make the plea after a conversation he had with Jonathan the previous day. The President had acknowledged that the results were going against him and that he was going to concede. “This was at a period when Nigerians were unsure who would win, with many politicians within the ruling People's Democratic Party still betting on Jonathan. He meanwhile, has asked Chidoka and a few others, including his spokesman, Dr. Reuben Abati, to give him a draft concession speech.

“The report had it that Jonathan's mind about the election had been soured by his loyalists that the election had been compromised, particularly in the Northern states, where under-aged voters were allowed to cast millions of votes in favour of his opponent, Buhari. It said: “With photographic evidence, Jonathan was shown how under-age people were allowed to vote at some polling units in Kano and Bauchi States. “This inflamed those within the government who were urging Jonathan not to concede, even as it became increasingly clear that he had lost. The general feeling within The Villa, a view fervently shared by Jonathan, was that the INEC Chairman, Prof Attahiru Jega, the INEC Chairman, was part of a “northern conspiracy” against him.

“With that, Jonathan decided to keep all options open. This emboldened some of his supporters who were desperate enough to want to disrupt the election. “Among the strongest arguments for a potentially-rigged election were the results from Kano State, Jonathan himself admitted,” to the author. “Go and check the results from Kano. The presidential election and that of National Assembly happened on the same day and same time. The National Assembly result reflected that about 800,000 people voted, but that of the presidential reflected a vote of about 1.8 million. “It had reports of what happened, but I decided that for such to be accepted, it meant that, those who called themselves my supporters must have colluded. I was betrayed by the very people I relied on to win the election.”

The book, however, revealed that Jonathan, not willing to allow the outcome to lead to bloodshed in any part of the country, opted to accept the result in good faith so as to save the country from trouble. Quoting Jonathan, the author said: “In 2011 when Buhari did not campaign anywhere and could not have won the election, there was a spontaneous violent reaction that led to the death of several innocent people, including youth corps members.” “I asked myself: what would happen in a situation in which there was already internal and international conspiracy in his favour?

I could not bear the thought of anybody dying, so I told myself I had only one option and that was to concede.” Despite the decision to concede, the book points out that there were various plots by his loyalists, including one to kidnap Jega, the INEC boss and returning officer for the election at the collation centre at the International Conference Centre, Abuja. Part of the script to derail the announcement of Buhari as winner, the book claims, was the attempt by former Niger Minister, Elder Godsday Orubebe, to disrupt proceedings at the INEC collation centre, a spectacle that unfolded on live television.

The book said: “Although he would later apologise for his misadventure, Orubebe's histrionics were part of a grand plan to disrupt the election, a plot that failed essentially because other parties involved refused to play to the script.” The book further disclosed: “While Jega did not have the exact details of what would happen, he had nonetheless been alerted to the fact that there would be a disruption in the process, including a kidnap threat. “On arrival at the collation centre that morning, we discovered that the gate between the International Conference Centre and NICON Luxury Hotel, which was always locked, had curiously been opened,” the book quoted a security officer detailed to work with Jega. A decision was immediately taken for the INEC Chairman not to leave the collation hall under any circumstances. “While the outcome must have deflated the hawks around Jonathan who were still looking for a way out of the looming defeat, it worked in favour of those who wanted him to concede before the final tally of the results.

“With Orubebe's antics dealt with by Jega, INEC continued to process the results from the remaining states. “Chidoka pleaded, (with Jonathan) “Why don't you take the wind off Jega's sail? By calling Buhari, you would have rendered whatever INEC is doing redundant.” “This school of thought won the day. At one point, Dudafa stood up and said loudly to Jonathan, “Daddy, anybody can say whatever they like, but we are leaving this house on May 29. You have done your best for Nigeria, and the people will appreciate your sacrifices.” “Shortly thereafter, Jonathan got up from his seat and went into his study where he picked up the phone and asked 'Control' to get Buhari on the line. He spoke briefly with Buhari, in a rather nervous tone, and then came out to announce to those in the room that he had conceded and congratulated the APC candidate on his victory.

“A relieved Chidoka asked, “Can I tell the world?” “Go ahead,” Jonathan directed, and Chidoka sent out a tweet from his mobile phone at exactly 5.23AM, Nigerian time. “And with that call, Jonathan pulled Nigeria back from the precipice, saving the country from what would have been a serious crisis, the ending of which nobody could have foretold. “It was gathered that after the president had conceded some of his loyalists still wanted a desperate fight to stall Buhari from being sworn in as President. The book quoted then Chairman of PDP, Jonathan's party, Adamu Muazu, as saying that some persons close to him wanted him to use the hierarchy of the party to contest the outcome of the election and cause avoidable problems for Nigeria and he resisted them. “After President Jonathan had accepted defeat, congratulated Buhari and the whole world was acclaiming him, some party leaders and-governors now wanted me to release a press statement that would ridicule me before civilized people and cause serious problems for our country,” the PDP National Chairman at the time, Mu'azu, said in the book. Mu'azu rejects Jonathan's claims Meanwhile, Mu'azu yesterday rejected claims by President Jonathan that he as national chairman of the PDP did not do much to ensure victory.

Reacting to the claim through Facebook, Mu'azu said: “Ordinarily, I would have ignored the allegation that I betrayed President Jonathan and my party, but doing so could create the impression that I really did,” he said. “I find it difficult to believe that President Jonathan would level such allegation against me. How can one betray himself?”

“As the then national chairman of the PDP, I have been at the forefront of the presidential campaign train. Those who are insinuating that I betrayed President Jonathan and my party are being economical with the truth. “In the face of abuse, insult and open ridicule by our friends and brothers we supported President Jonathan faithfully. “In all sincerity, I gave my best and all to my party.” Those who blame us for not delivering maximum votes to the former president in the North seem to have forgotten that it is the people who vote.