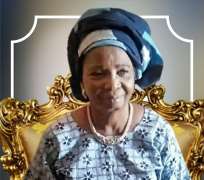 Olayinka, who made this known in a statement issued Wednesday, said the burial ceremonies will commence on Thursday, April 27 with the corpse leaving Ekiti State University Teaching Hospital, Ado Ekiti at 10 am.

Lying-in-state will commence at the Tenibiaje Family House in Ile-Odofin, Okemesi Ekiti at 12 noon while Christian Wake will be held at 5pm and artiste night will follow at 8pm.

Funeral service will take place at 10am on Friday, April 28, 2017 after which the corpse will be interred and entertainment of guests follows at Fabunmi Memorial Grammar School, Okemesi Ekiti.

While describing his late mother as an easy going and caring woman, Olayinka said; “She was a mother in millions, who never joked with the welfare of her children. She gave us, her children love and care, even at extremely difficult times. Even in death, we will continue to adore her.”