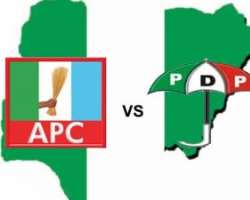 No fewer than 800 members of the All Progressives Congress (APC) in Nsit Ubium Local Government Area, Akwa Ibom, on Saturday defected to the Peoples Democratic Party (PDP).‎

‎Leading the defectors to the PDP, the APC Chairman in the council area, Mr Aniefiok Ekah, said that the defectors had ‎endured severe hunger in APC and could no longer continue to tolerate such.

Ekah, who submitted every document belonging to APC in his possession for destruction, however, appealed to the PDP not to treat the returnees as outcasts.

‎He explained that some of them left PDP in 2015 due to cheating by some party leaders, who refused to protect their interests.

“This is the membership register, registration forms and every other item in my possession.

“They were all given to me by APC, please burn them to ashes, there is nothing like APC again in Nsit Ubium.

“We left PDP in the first place because of cheating; middle men were short-changing us of what was meant for party supporters, but we have suffered so much hunger in the APC,” Ekah said.

The state Chairman of PDP, Mr Paul Ekpo, while receiving the defectors, thanked them for the bold steps taken and pledged to fully integrate them into the PDP family.

Ekpo said that PDP in the state would continue to accord importance to the interest and welfare of members, adding that the deflectors would be fully integrated into the party.

In his remarks, the Speaker, Akwa Ibom House of Assembly, Mr Onofiok Luke, said that stakeholders of PDP in Nsit Ubium would continue to hold side by side the philosophy of building industries and empowering the people.‎

Luke, who is also member representing Nsit Ubium state constituency, frowned at some stakeholders, who refuse to report back progress made so far to the people at the grassroots in their constituencies.

‎He assured the people that he would not rest on his oars in delivering the dividends of democracy which spans through educational support, agricultural support and empowerment in numerous sectors.

Luke called on Nsit Ubium people to support the state governor, Mr Udom Emmanuel to continue in office after 2019.

‎The speaker urged party supporters in Nsit Ubium to receive the defectors with open arms, ‎advising the youths to abhor all forms of criminality and violence by promoting peace in the area (NAN).