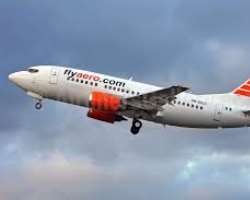 A passenger aboard the flight, which took off from Port Harcourt and bound for Lagos, said the plane started smoking barely 20 minutes after departure.

A domestic passenger plane allegedly belonging to Aero Contractors reportedly burst into flames shortly after take off on Tuesday, April 18.

A Nigerian Twitter user, @puffypearl, who said she was on board, narrated how the incident happened.

She said the flight, which took off from Port Harcourt and bound for Lagos, started smoking barely 20 minutes after departure.

According to her, one of the blades sparked and the entire plane was filled with smoke, choking panicking passengers.

She posted a video showing smoke slowly flooding the passengers area, with many of the terrified passengers praying fervently.