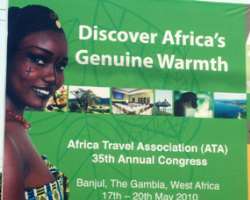 A billboard for a tourism conference in Gambia. (CPJ)
Listen to article

Who would not like to enjoy luxurious beach resorts and quaint fishing villages on the “Smiling Coast of Africa”? This is the pitch that the Gambian government made to participants of an international tourism conference last week. In fact, behind the idyllic facade of a tropical paradise wedged on Africa's western Atlantic coast is the grimace of Gambia's independent press.

Years of political censorship and intimidation, arbitrary arrests, repressive media laws and the unsolved murder of a prominent editor have forced some of the best Gambian journalists into exile. Those remaining in the country work in fear and intense self-censorship.

The Africa Travel Association (ATA), which convened its annual world congress in Gambia last week, calculated that the nation's poor human rights record was not relevant to tourism. “When people plan their trips they don't really think about issues of human rights in the destination country. Things like freedom of speech are not mentioned by trip advisors. When you travel, you see what you want to see,” ATA Gambia marketing committee chairman Marcel Hendrickx told CPJ in April.

The government does its best to keep tourists in the dark about Gambia's political and social conflicts. In particular, journalists who try to convey both negative and positive aspects of Gambian tourism are discouraged or intimidated from publishing such articles. In March for instance, two reporters with the private Daily News, Sana Camara and Saikou Jammeh, were arrested by Gambia's Tourism Security Unit while on assignment at the public Palma Rima Beach, and accused of “taking photographs without authorization,” according to the Media Foundation of West Africa. Local sources who declined to be identified for fear of government reprisals told CPJ that the journalists were investigating the tourism-related sex trade. For the government, such reports are clearly undesirable; the two reporters were forced to delete photographs, according to news accounts.

Speaking to ATA conference participants, Gambia's tourism minister, Fatou Mass Jobe Njie, articulated the nation's sales pitch. “There is abundant peace and tranquility which has been ensured thanks to the efforts and sterling qualities of our dynamic president, Sheikh Professor Dr. Alhaji Yahya A. J. J. Jammeh.”

But President Jammeh has been less than tranquil about journalists and international observers in recent years. "The whole world can go to hell. If I want to ban any newspaper, I will, with good reason," he said in 2006. "I don't believe in killing people. I believe in locking you up for the rest of your life," he added in response to questions about the unsolved 2004 murder of editor Deyda Hydara.

More recently, he mocked those seeking justice for Hydara. “Let them go and ask Deyda Hydara who killed him,” he said last summer before throwing into prison Gambia Press Union leaders who criticized the insensitive remarks. Then came a chilling warning to journalists and human rights activists: “So they think they can hide behind so-called press freedom and violate the law and get away with it. ... If anybody is caught, he will be severely dealt with."

Jammeh's administration has failed to address issues related to its treatment of journalists and respect for human rights. The Gambian administration is currently a defendant before a West African human rights court in a case of illegal detention and torture brought by exiled editor Musa Saidykhan, whose newspaper was banned in 2006. The government is also resisting an order of the same court calling for its immediate release of imprisoned journalist "Chief" Ebrima Manneh. Despite reports of Manneh's sightings in government custody, a Gambian delegation told the UN Human Rights Council in March that “the government has investigated his whereabouts, but to no avail.”

Tourism has the potential to improve the lives of the citizens of this impoverished nation; improving the country's human rights record would enhance that effort. The government would reap the benefits of investor and tourist confidence if a vibrant and independent press were allowed to freely report on the nation's complexities.