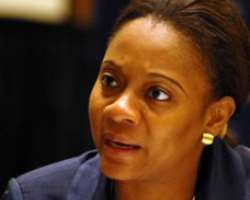 Oteh
Securities and Exchange Commission (SEC) has come under hot criticisms over statements credited to its Director General, Ms Arunma Oteh, and the commission's unilateral approach to market retooling.

The SEC DG recently stated that the trading machine on which Nigerian Stock Exchange (NSE) executes its transactions is obsolete and incapable of meeting current challenges of a dynamic and growing capital market that can be described as a world class capital market.

But speaking with Daily Sun over the issue, the Exchange flayed the statement, saying its trading platform was not obsolete but the second best worldwide used by 30 countries across the world.

According to Mr. Sola Oni, the trading platform was acquired through one of the best vendors in the global securities market called NASDAG OMS. He said that the system called Horizon, is constantly upgraded in line with advice of their consultants in NASDAG OMS.

'It is of interest to note that more than 30 countries are using the system and we keep on upgrading it in line with the advice of our consultants, NASDAG OMS. Really, the issue of being obsolete does not arise.

'When we started our electronic system in 1999, our turnover was 14.1 trillion on the average but today we are talking in terms of average of N2 trillion. So if look at the exponential increase and the level of turnover, we should not be saying that trading engine is obsolete,' Oni stated.

Continuing the General Manager/Head, Corporate Affairs, said that there were for a where the DG of SEC can discuss with the Exchange if there is any operational issue to discuss. He cited the Capital Market Committee (CMC) where the Management of the Exchange is also represented, Financial Services, Regulatory Coordinating Committee (FSRCC), a body comprising CBN, NDIC, SEC, NSE, Min. of Fin, NICOM and all other regulators in the financial market.

'These are areas where we expect comments of this nature to be made. But as far as we are concerned we only read it on the pages of newspaper. We believe that the Commission should also appreciate the sensitive nature of our business. We run a conservative market and we deal with negotiable instruments. So comments on the market should send massages of hope to people,' Oni stated.

He used the opportunity to restate that there was no leadership succession crisis at the Exchange, pointing out that what was perceived as a crisis was actually a planned succession plan that was concluded during a retreat to chart a new course for development of the market.

And the plan progressed as planned until somewhere along the line Mr. Lance Elakama, immediate past Assistant Director General of the Exchange, made a change of heart to stay put contrary to the plan.